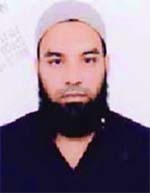 Mohammad Basharuzzaman, who is among the 10 missing youths appearing on a police list after the July 1 Dhaka cafe attack, is also
a student of the North South University (NSU). He is the son of Siraj Uddin, the headmaster of Lalpur High School in Rajshahi's Tanore Upazila. Siraj is also a member in ruling Awami League's Tanore unit committee. Uncle Abul Kashem said Basharuzzaman reduced contact with his family after getting admission in NSU's electrical and computer engineering department in 2007. He made fewer contacts after getting married two years ago in Dhaka.
The family came to know about the youth going missing after his name and photo were published in the media, said Kashem, Chairman of Talanda Union Parishad.
Nibras Islam - two of the five attackers who killed 22 people at the upscale cafe in Gulshan-2 on July 1 night, before being shot dead by army commandos the next morning, was a student of NSU. One of the terrorists who killed two policemen in an attack on a check-post near Sholakia Eidgah ground on July 7 morning, before being shot dead by police, was also a student of the private university.
Three of the cafe attackers and dead Sholakia attacker Abir Rahman, all from wealthy families, had studied in top and expensive English medium schools. All six had been missing for the past several months. Seven of the eight persons convicted for the February 2013 murder of blogger and Ganajagaran Mancha activist Ahmed Rajib Haider were also NSU students. After recent findings suggested that students from wealthy families and top private institutions tend to get involved in extremism after running away, the government urged parents to inform the authorities about their missing children. Then the law enforcers released the names and photos of the 10 youths who have been missing for quite some time.