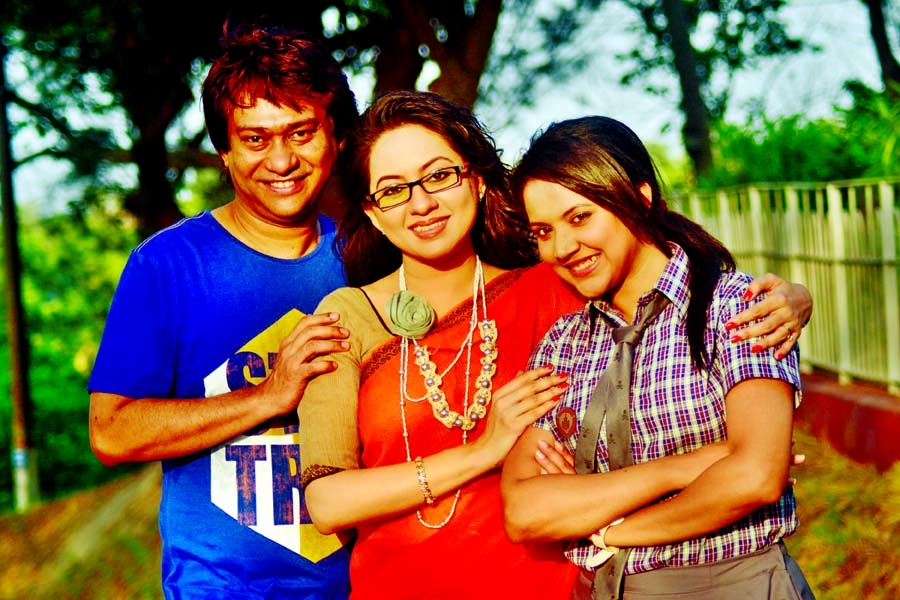 Earlier popular singer cum TV actor Partho Barua and popular TV actress Tarin had performed together in several TV plays those were positively accepted by the viewers. May be the viewers could get the opportunity to watch them as pair in many other plays. But due to engagement with music Partho couldnât be able to give more time in acting. This time Partho Barua performed against Tarin in a TV play titled Aporahno, which script was written by Rudro Mahfuz. Though Tarin and Partho performed together as pair in the play, but the viewers will also get another heroine for the demand of the story of Aporahno. This second heroine is Lux superstar Urmila Srabonti Kar. Basically story of the play Aporahno revolves with Partho, Tarin and Urmila. The play was directed by Shakhawat Hossain Manik. Shooting of the play was wrapped up yesterday.While talking about the play Partho told this correspondent, âIn the play Aporahno, I acted in role of a singer. I have performed in this role for first time in a TV play. I have enjoyed working in the play. Earlier I had worked with Tarin. I always give priority on Tarinâs suggestions while acting. Therefore, I always try to listen her advice while taking part in shooting.â Tarin shared her feelings by this way, âUnder the direction of Shakhawat Hossain Manik and Versatile Media it was my first work. Story of the play is really nice. Earlier I had talked about the script of the play with its director for several times. I am really amazed about the working style and sincerity of the director Manik about the play. I think viewers will also enjoy the play.ââBoth Parthoda and Tarin apu are very fond of me. It is really fortunate for me to get the opportunity to perform with them in a TV play,â Urmila said.The play Aporahno will go on air on NTV on the occasion of upcoming Eid-ul-Fitr, said its director Manik.It may be mentioned that Partho Barua has recently finished shooting of Afzal Hossain Munna directed a telefilm titled Sedin Duâjon-e. On the other hand, Tarin has finished work of Tariqul Islamâs play Bewarish Manush.Earlier Tarin and Partho Barua performed together in a drama serial titled Jolkona under the direction of Arif Khan in a script written by Faria Hossain. Therefore, they had performed together in a faction play titled Ami Bhul-e Jai Tumi Aamar Nou under the direction of Fahmida Irfan.