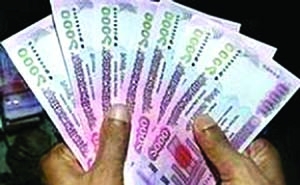 Bangladesh's taka has got stronger against the US dollar reporting a steady exchange rate for a year amid periodic intervention by the central bank.
The dollar was traded at Tk 77.65 in the inter-bank money market on Monday against Tk 77.55 last month.
In public transactions, the dollar exchange rate was even less.
State-owned Sonali Bank was buying it at Tk 77.30 and the rate on export bills stood at Tk 77.34 on Monday. Economist Zaid Bakht attributed the strengthening of taka to 'the positive trend' in export earnings and remittance inflow.
He said Bangladesh Bank intervened to stabilise the exchange rate, even in the floating money market-or else exports would be adversely hit and remittance flows would drop.
Bakht said: "But after the forex reserves crossed the $20-billion mark recently, the central bank has slowed the purchase of the dollar, letting it depreciate. So taka is getting stronger."
According to Bangladesh Bank statistics, it bought $3.5 billion in the first eight months of the current fiscal year, beginning July 1, from the market.
In the whole of the previous fiscal, Bangladesh Bank purchased $4.79 billion.
A central bank official told bdnews24.com requesting anonymity that they had not been buying any dollar from the market for last one week.
The central bank had introduced floating exchange rate in 2003 theoretically letting the market determine the rate.
Before that, Bangladesh Bank used to fix the exchange rate. Asked if the depreciation of the dollar would negatively impact on exports and remittance inflow, Bakht, a research director at Bangladesh Institute of Development Studies (BIDS), said: " A huge fall in dollar value would have an impact. This has to be taken into consideration."
He, however, said there was 'positive aspects' of dollar's depreciation. "It lessens the cost of imported goods."
The dollar kept appreciating from early 2012 and reached Tk 85 at a point before it started to fall. In April last year, it depreciated to Tk 77.75. The foreign exchange reserves with the central bank stood at $ 20.12 billion at close on Monday.
The reserves crossed the $20-billion mark on Apr, 10 hitting a new record.
Bangladesh Bank officials said the reserves would be hovering over $ 20 billion until ACU (Asian Clearing Union) payments were cleared in the first week of May.
According to Export Promotion Bureau, export earnings recorded a growth of 13 percent in the first nine months of the current FY over the same previous period.