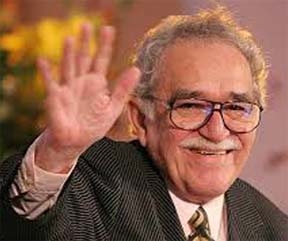 Esther Lombardi :
Gabriel Garcia Marquez is a famous Latin American writer, known for One Hundred Years of Solitude and many other novels, plays, essays, and other works. He received the Nobel Prize in Literature in 1982.
Gabriel Garcia Marquez was born on March 6, 1927 in Aracataca, Colombia. His parents were Gabriel Eligio Garcia (pharmacist) and Luisa Santiaga Marquez. They left him in the care of his grandparents--DoÃ±a Tranquilina Iguaran and Colonel Nicolas Ricardo MÃ¡rquez Mejia--from the time he was 2 until he was 9. So, they affected many aspects of the man he would become. Their stories, in particular, shaped his worldview. In an interview with Marlise Simons for The New York Times, Marquez said that his grandmother was the source of his "magical, superstitious and supernatural view of reality."
Marquez studied law at University of Cartagena, but (as is so often the case with those who eventually become the greatest writers), he took this opportunity to dabble in the world of writing. He wrote first for El Universal in Cartagena, then for El Heraldo in Barranquilla. He became a part of the Barranquilla Group, a group of writers and journalists. During this time, he was also introduced to the works of great writers like William Faulkner and Virginia Woolf.
While living in Bogata, his contributions to Bogota's El Espectador gave him his first taste of controversy; and he went to Europe as their foreign correspondent.
In GarcÃ­a Marquez : The Man and His Work Bell-Villada writes, "Owing to his hands on experiences in journalism, GarcÃ­a MÃ¡rquez is, of all the great living authors, the one who is closest to everyday reality."
Marquez met Mercedes Barcha when she was in college. They eventually married and had two boys : Rodrigo and Gonzalo.
As part of the conversations between Gabriel Garcia MÃ¡rquez and Plinio Apuleyo Mendoza, in The Fragrance of Guava, Marquez said, "All through my life there has always been a woman to take me by the hand and lead me through the confusion of existence, which women understand better than men... I think nothing awful can happen to me if I'm with women. They make me feel secure. Without this security I couldn't have done half the worthwhile things I've done in my life..."
Leaf Storm was his first fictional work to be published, though it took seven years for Marquez to find a publisher. In Gabriel Garcia Marquez: A Critical Companion, Ruben Pelayo noted that Leaf Storm was "his favorite because he felt that it was the most sincere and spontaneous."
Marquez went on to write One Hundred Years of Solitude--he wrote daily for 18 months; and his family descended into desperate straits (unable to pay the butcher or the rent) while he studiously labouredÂ  on his novel. The story had been brewing in his mind since he was 18--it's based on his early experiences, growing up in his grandparents' house. It was a story that just had to be told.
In The Fragrance of Guava, Marquez said, "Most critics don't realise that a novel like One Hundred Years of Solitude is a bit of a joke, full of signals to close friends; and so, with some pre-ordained right to pontificate they take on the responsibility of decoding the book and risk making terrible fools of themselves."
Of course, One Hundred Years of Solitude is usually the epic novel for which he is probably most well-known (even Bill Clinton famously claimed that the novel was his favorite!). Other memorable novels include : Love in the Time of Cholera and Autumn of the Patriarch. His continued fame and sphere of influence prompted Robert Sims to write: "Garcia Marquez continues to cast a lengthy shadow in Colombia, Latin America, and the United States. Critical works on the 1982 Nobel laureate have reached industrial proportion and show no signs of abating. Moreover, Garcia Marquez has galvanised Colombian literature in an unprecedented way by giving a tremendous impetus to Colombian literature. Indeed, he has become a touchstone for literature and criticism throughout the Americas as his work has created a certain attraction-repulsion among critics and writers while readers continue to devour new publications. No one can deny that Garcia Marquez has helped rejuvenate, reformulate, and recontextualise literature and criticism in Colombia and the rest of Latin America."