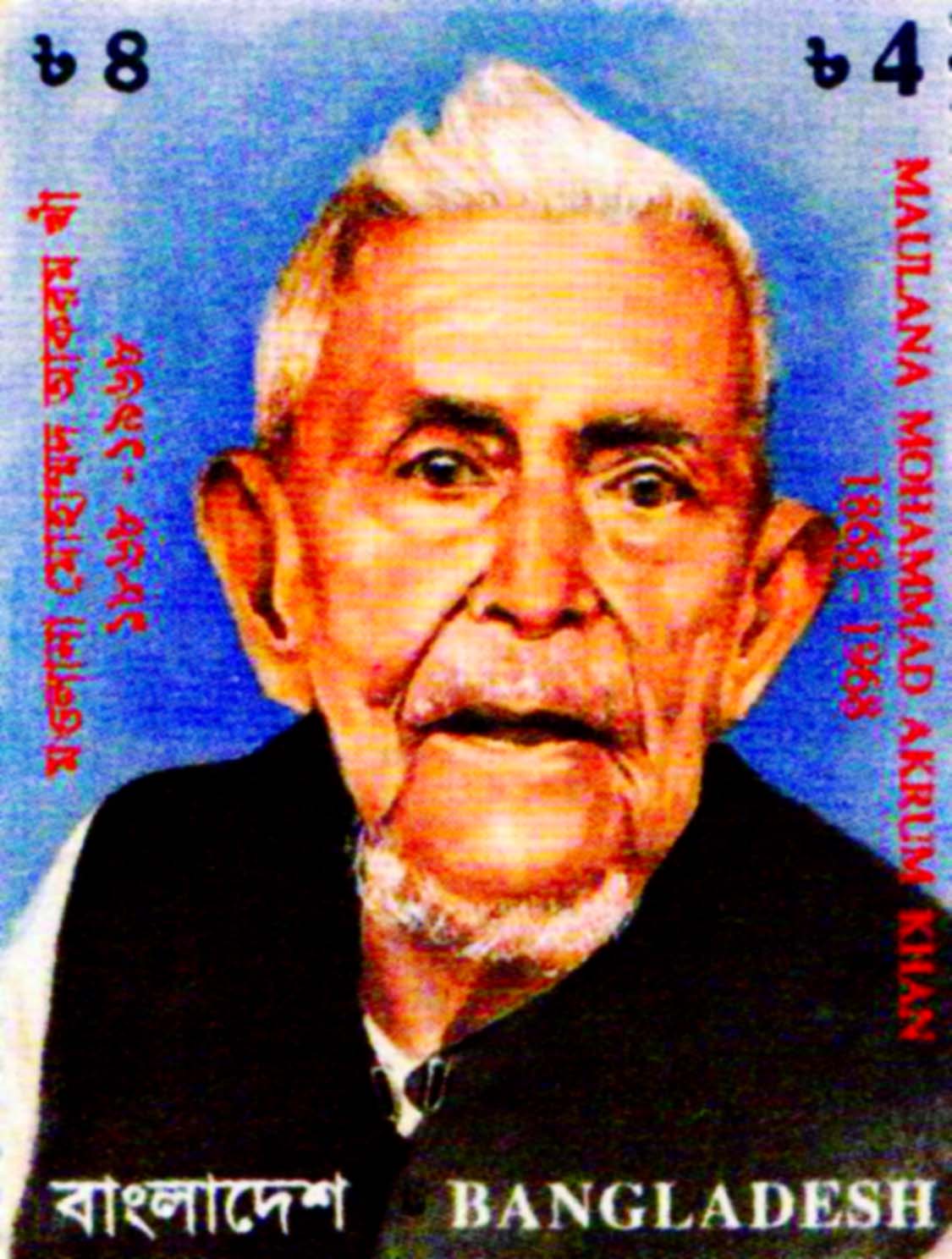 Muhammad Altaf Hussain :
The 48th death anniversaryÂ  of Maulana Muhammad Akram Khan, pioneer of Bengali Muslim journalism in the sub-continent and champion of the cause of Muslim resurgence has been observed onÂ  18th August. The chequered life of Maulana Muhammad Akram Khan, which covered journalism, literature, politics, religion, social reform-- is unique in the history of Muslim renaissance of the sub-continent.
Akram Khan was born in Hakimpur of district of 24 Pargana of Bengal Presidency of British India (present West Bengal) in 1869. He was a student of Kolkata Madrasa (present Aliah University). He entered journalism at a very young age before getting involved in politics. Mohammad Akram Khan was a journalist, politician and Islamic scholar. He was the founder of the first Bengali daily Azad.
Early in his career, he worked at newspapers - the Ahl-i-Hadith and the Mohammadi Akhbar. Between 1908 to 1921, he worked as the editor of the Mohammadi and the Al-Islam. He published the Zamana and the Sebak between 1920 and 1922. Sebak was banned and Akram Khan was arrested for supporting the Non-Cooperation and the Swadeshi Movements through his anti-government editorials.
On 31st day October 1936, Akram Khan published The Azad, the only Bengali daily of that time which contributed greatly to Islamic renaissance and generate support for the Muslim League in Bengal. The Azad played an important role during the Bengali Language Movement for its advocacy of Bengali. Other important supporters were The Sainik, and the Insaf, which was an English language daily. Weeklies from the East Pakistan that supported the Movement were Zindegi and Insan from Dhaka, NaoBelal from Sylhet and Sangram from Feni. Other newspapers supporting the movement were Ittehad, edited by Abul Mansur Ahmad including Ananda Bazar Patrika,Yugantar and Satyayug.
The daily lost its appeal after Maulana Akram Khan died and ownership controversies arose. It lost readership. Later, the daily was given to its legal owner and Managing Director Mohammad Quamrul Anam Khan to be run under private administration. Due to lack of financial support and government policies, The Azad was shut down after 1992.
Before joining politics, while as a student of Alia Madrasa Akram Khan generated a Movement in favour of teaching all subjects in Bangla. He of course got it done as of till today. He was a greatÂ  scholarÂ  in Arabic, Persian, Urdu, and Bengali.
Akram Khan was one of the founding members of the Muslim League in 1906. He also joined All India Mohammadan Educational Conference - an organisation promoting modern, liberal education for the Muslim community in India. It was founded by Syed Ahmed Khan, also the founder of the Aligarh Muslim University.
Maulana Akram Khan was involved in the Khilafat and Non-cooperation Movement from 1918 to 1924. He was elected Secretary of the All India Khilafat Committee at the conference held at Ahsan Manzil in Dhaka in 1920, which was attended by other eminent Khilafat leaders like Abul Kalam Azad, Maniruzzaman Islamabadi and Mvi. Mujibur Rahman responsible for collecting funds for the Turkey Khilafat. During 1920-1923, he organised public meetings in different parts of Bengal to propagate the cause of the Khilafat and the Non-Cooperation Movement. As a believer in Hindu-Muslim amity, Akram Khan supported Chitta Ranjan Das's Swaraj Party in Kolkata in 1922, and also the Bengal pact in 1923. But due to the communal riots of 1926-1927 and other contemporary political developments, Akram Khan lost his faith in Indian nationalist politics and left both the Swaraj Party and Congress. From 1929 to 1935 he was deeply involved in Proja or peasant politics. However, he left peasant politics in 1936.
After the partition of India (1947) he opted for East Bengal and settled in Dhaka. He was the President of Muslim League (East Pakistan) till he retired from politics in 1960. His role during the Language Movement is still remembered with gratitude. Maulana believed in identity as a Muslim and Bengali and was liberal in outlook. He fought for mother language Bangla, champrioned the cause of Muslim renaissance and resurgence and fought for the economic emancipation of the down-trodden - peasants of Bengal. A non-communal leader Maulana Akram Khan tried his best to establish Hindu-Muslim amity.
He was the founding president of Bangla Academy.
Mohammad Akram Khan died on 18 August 1968 at the age of 99. He was buried at the Ahl-i-Hadith Bongshal mosque graveyard at Lalbagh, Dhaka.
In 1981, he was awarded the Independence Day Award.
Maulana Akram Khan's great literary achievement is 'Mustala Chorito' -the biography of Hazrat Muhammad (Sm), a book praised by literary and religious stalwarts. n
(The writer is a senior journalist & Chief Editor
Bangladesh News Syndicate -BNS)