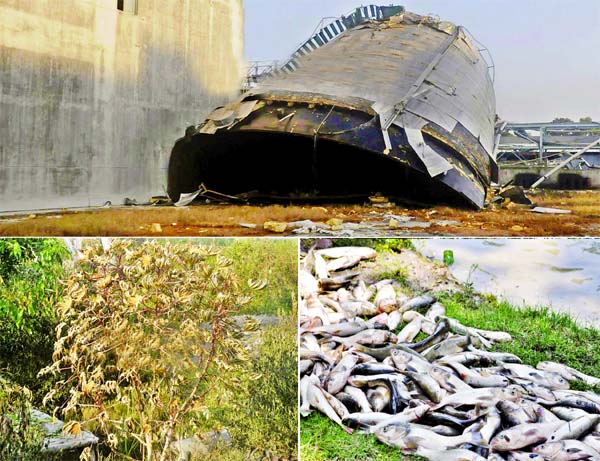 [Pictures clockwise] The reservoir of di-ammonia phosphate (DAP) plant in Chittagong, from where ammonia gas came out after Monday night\'s explosion, is still remained open as Engineers could not repair the broken portion. Fishes and other aquatic creatu

The ammonia leaked from the DAP fertiliser factory in Chittagong's Anwara has affected trees and water bodies in the area.
The leaves of trees and bushes in around a square kilometre area centring on the factory were on Wednesday observed to have turned yellow. The acrid smell of ammonia was still in the air in the afternoon. Birds were avoiding Rangadia village. The leaves of over 200 trees in and around the factory have been curled. The bushes and grass along the streets have paled as well.
All the fishes in a nearby private project have died. A worker of the project, Md Touhim, told bdnews24.com that around 100 persons depended on it for their livelihood.
"The owner may get government help. But how shall we run our families?" he asked.
The smell of rotten fish has now been added to that of ammonia. The water of the fish pond has turned reddish after the water sprayed by Fire Service to remove the gas flowed into the pond.
Amal Kanti Barua, managing director of the factory, said however that the impact of the gas leak was lessening.
He also said engineers of the Chinese firm Complant, which set up the factory, would visit it on Thursday.
According to college student Rihan Noor said birds had been avoiding the area since the leak.
Industries Minister Amir Hossain Amu visited the factory on Wednesday. "The leak has caused some damage. I can smell (the gas) even now," he said.