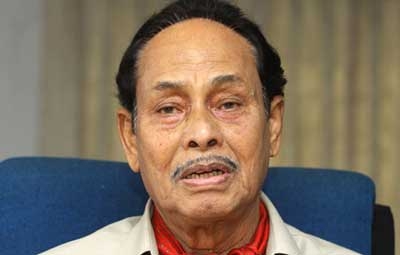 Jatiya Party chief HM Ershad takes oath as Member of the 10th Parliament ending all speculations Jatiya Party chief Hussein Muhammad Ershad has taken oath as Member of the 10th Parliament. Â He was administered the oath by Speaker Shirin Sharmin Chaudhury just past midday. Ershad avoided speaking to anyone as he entered the Parliament premises and walked straight into the Speaker's chamber. He later signed the oath document at the Parliament Secretary's room. The Jatiya Party chief entered the Parliament building opposite to the Ganabhaban on a route usually used by the President, Prime Minister and the Deputy Leader of Parliament. Ershad was jovial as he greeted Speaker Chaudhury. Only Parliament Secretariat officials were allowed near the Speaker's room when Ershad was taking oath. Jatiya Party functionaries have said before that Ershad might take oath anytime soon. He had been in a military hospital since Dec 12. The former military dictator has played flip-flop with the Jan 5 polls, first agreeing to contest it and then saying he was backing off a day after submitting nominations. The Jatiya Party did contest the polls and emerged as the second largest party in the 10th Parliament after the Awami League. It won 33 seats -- 20 without a contest. Ershad's wife Raushan Ershad took oath with most other JP lawmakers last week and said she would function as Opposition Leader, quickly adding "with my husband's blessings".