Schoolgirl stabbed to death in Madaripur: One arrested 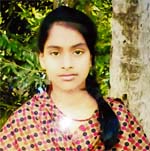 A schoolgirl has been stabbed to death in Madaripur's Kalkini. Police have detained a youth named Milon Mandal, 20, who is the 'private tutor' of the victim's younger brother, in connection with the murder.The family of the girl, Nitu Mandal, 16, a ninth grader at Nabagram High School, has alleged that Milon killed her after she rejected his 'proposal of a love relationship'.
Madaripur Additional Superintendent of Police Ansar Uddin said Nitu was murdered at Purba Nabagram on Sunday morning.
Quoting family members, he said Milon had regular access to their home as he had been tutoring Nitu's younger brother. "Initially we have found that Milon proposed to Nitu recently, but she said no. And yesterday morning, Milon stabbed her when she was going to school," he said. She died while being taken to Madaripur Sadar Hospital by local residents. Milon was later detained with assistance from the locals, Ansar Uddin said.
Nitu's grief-stricken father Nirmal Mandal told bdnews24.com: "I treated Milon as my own son. I can't even imagine that he could do this." The girl's body is being kept at the hospital for autopsy.