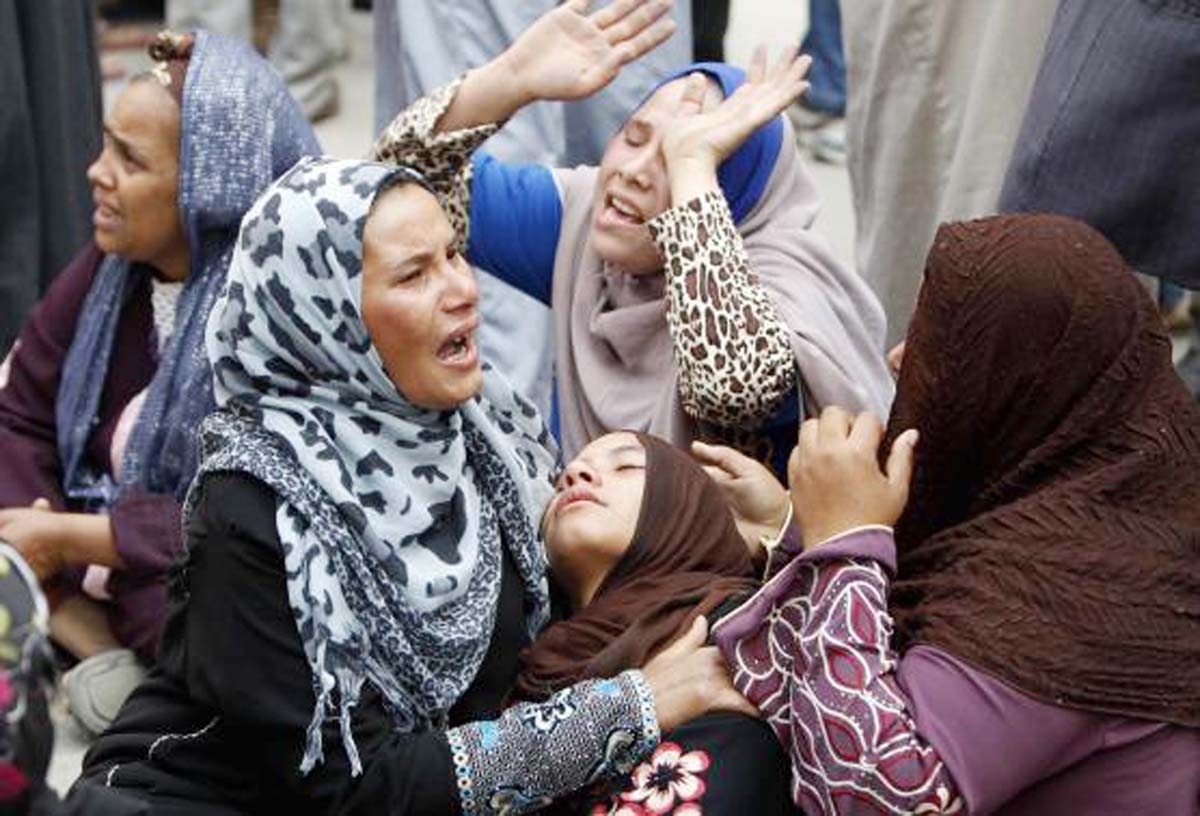 Relatives and families of members of Muslim Brotherhood and supporters of ousted President Mohamed Mursi react after hearing the sentence, in front of the court in Minya, south of Cairo .

A judge at a mass trial in Egypt has recommended the death penalty for 683 people - including Muslim Brotherhood leader Mohammed Badie.
The defendants faced charges over an attack on a police station in Minya in 2013 in which a policeman was killed. However, the judge also commuted to life terms 492 death sentences out of 529 passed in March in a separate case.
Also on Monday, a court banned a youth group that helped ignite the uprising that toppled Hosni Mubarak in 2011. The decision passed in Cairo to outlaw the April 6 pro-democracy movement was based on a complaint that accused the group of "tarnishing the image" of Egypt and colluding with foreign parties.
The verdict hit waiting relatives like a body blow. Several women collapsed on the ground, and had to be carried away. Others clustered together in their grief, some holding photos of their loved one. A man stood weeping in front of a line of riot police, protesting that his brother was an innocent man.
One woman told us her 15-year-old son was among the almost 700 men who received a preliminary death sentence. Confusion added to the torment for those whose loved ones were among 529 men in a separate mass trial in which 37 life sentences were upheld, and the rest commuted to life imprisonment.
In the chaos outside the court relatives could not find out which men had been condemned to hang. One woman told us her son - who died three years ago - had been convicted in the case.
Ahmed Maher, the group's leader, was sentenced to three years in prison in December for violating a law that bans all but police-sanctioned protests.
The cases and speed of the mass trial hearings have drawn widespread criticism from human rights groups and the UN. The trials took just hours each and the court prevented defence lawyers from presenting their case, according to Human Right Watch.
The sentences have been referred to the Grand Mufti - Egypt's top Islamic authority - for approval or rejection, a step which correspondents say is usually considered a formality. A final decision will be issued in June. The BBC's Orla Guerin says relatives collapsed in grief after hearing the verdict. A large crowd chanted: "Where is the justice?"