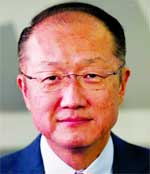 World Bank President Jim Yong Kim has arrived in Dhaka to see firsthand the progress Bangladesh has made in eliminating poverty. Finance Minister AMA Muhith received him when an Emirates aircraft carrying the chief of the global lender touched down at Shahjalal International Airport on Sunday afternoon. At the airport, Economic Relations Division Secretary Mohammad Mejbahuddin and Bangladesh's Alternative Executive Director in World Bank Headquarters Mohammad Mosharraf Hossain Bhuiyan were present.
World Bank Country Director for Bangladesh Qimiao Fan and other officials were also present.
The last time a World Bank (WB) chief visited Dhaka was in 2007, when Robert Zoellick headed the global lending agency. Soon after Bangladesh's emergence in 1971 following a war with Pakistan, the then World Bank chief Robert McNamara visited Bangladesh.
Former World Bank chiefs Paul Wolfowitz and James Wolfensohn also came to Bangladesh during their respective tenures. Kim left for Dhaka after attending the annual meetings of the World Bank Group and the International Monetary Fund (IMF) in Washington.
During his visit the WB president will participate in the International Day for the Eradication of Poverty celebrations on Monday and also deliver a public lecture.
Finance Minister Muhith considers the WB chief's visit as a recognition of Bangladesh's success in its campaign against poverty. He said that the visit of the WB president was the right opportunity to showcase Bangladesh's success in the fight against poverty so far.
Among other engagements, Kim will participate in a public discussion on poverty elimination in the country on Tuesday. The prime minister will be present at the meeting.
He will then speak at a panel discussion titled, "End global poverty by 2030, the Bangladesh experience.'
On the same day he will head for Barisal to inspect a few World Bank financed projects there.
He will 'see firsthand the progress Bangladesh has made in transitioning successfully to a lower-middle income country, despite daunting development challenges', the World Bank release said in a statement.