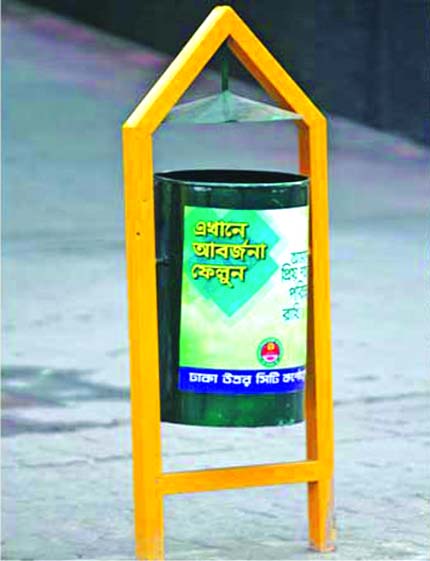 Gulam Rabbani :
Mini waste-bins were placed almost in every roads and streets of the capital in order to keepÂ  the city clean. For this purpose, the city mayors wanted the city residents' co-operation, but unfortunately the project of Tk three crore flopped in less than a year due to the unconsciousness of the people. While walking by the roads, a large number of waste-bins are found missing, while trash either in the drains or on the roads.
Now these bins are being treated as source of wastage of money. It is a pity that the people ignored the importance and gravity of the bins and that is why the city corporations' initiativeÂ  for a clean city failed.
Sources of Dhaka North City Corporation (DNCC) and Dhaka South City Corporation (DSCC) said, around six thousands mini bins were set up at various points of the city earlier this year. But, all the efforts to build a clean city are jeopardising.
DSCC Mayor Sayeed Khokon declared 2016 as 'Cleaning Year' in a press briefing on December 23, 2015. In that briefing, he disclosed his plan to set up mini waste-bins in footpath of roads.
According to that plan, six thousand mini waste-bins were placed from February to September of this year. Most of them were small in size. Around one thousand bins were set up in the DNCC at the same time. Though another five thousand bins, which were scheduled to beÂ  installed,Â  have not been done finally.Â Â Â Â Â Â Â Â Â Â  Â
During spot investigations, it is found that there is no bin in the crowded places where it is needed most. Officials at the Dhaka South City Corporation (DSCC) said that they executed the installation work in haste, as it was the election commitment of Mayor to install those on footpaths to make the city a clean one, while their counterparts in the Dhaka North City Corporation said they did the job based on a study.
The officials of both DSCC and DNCC said the bins were installed not for houses or business entities, but for pedestrians so that they can put light garbage into those instead of hither and thither that makes the city dirty. But during the visit, it was found that the pedestrians were not using the bins, but throwing on the road or footpaths. The street vendors were, however, preferring the bins.
Tariqul Islam, a student, was eating banana from a shop and dropped the peel on the footpaths though there was a bin in front of him. When asked, he said, 'We are habituated to drop trashes here and there after eating something. And I did it out of that bad habit.'
The bins, installed on footpaths across the capital, are small in size and they could contain a little quantities of waste. As a result, people, especially the vendors, who drop trashes in the bins, cannot use longer tine. They rather dump the garbage on footpaths making the city dirty.
Mohiuddin Ahmed Rubel, a city resident and a private job holder, thinks that mini bins were installed without proper plan. So, these did not become helpful. These bins are too small to dump big size waste.
Khandker Millatul Islam, Additional Chief Waste Management Officer of DSCC, said the waste bins were installed for pedestrians so that they can put light garbage there. These wereÂ  not meant for houses and business entities.
He also said,Â  it's a new orientation in our country. So, our citizens will take time to be habituated with these. We are trying to make them aware through loudspeakers and distributing leaflets.