They render title song of serial besides acting 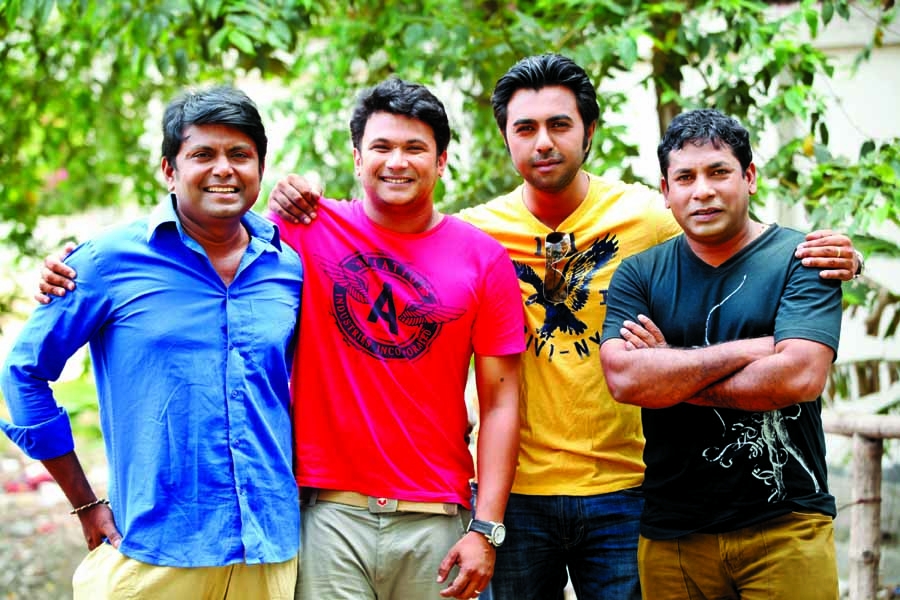 It is fact that various actors perform in a drama serial. But reality is that to cast popular actors in a serial at a time is really difficult for the director. This difficult task has been done by popular play director of present time BU Shuvo.
He has made a drama serial to cast four popular actors of present time - Mosharraf Karim, Apurbo, Arfan and Naim. Title of the serial is Bachelor. Mehedi Hasan Joni has written its story, while its script was composed by director BU Shuvo himself.
Most interesting is that these four popular actors lent their vocals for the title song of the serial besides acting. Not only this they have also written its lyrics and composed tune and music of the song.
At first, only these four actors were confirmed to act in the seril Bachelor. When director Shuvo started shooting he found that each of them (actors) were giving title songs. Later director Shuvo decided to give them opportunity to compose a common title song for the serial. As a result, recording of the title song was done at BU Shuvoâs shooting house in the cityâs Mirpur DOHS on Sunday.
While talking about the song actor Mosharraf Karim told this correspondent, âEveryday few new things are happened in our lives. We have rendered the title song of the serial together which lyrics, tunes and music were composed by ourselves. Itâs really a new beginning for us. I think viewers not only enjoy to watch the serial but also to enjoy our rendering title song.â
Apurbo shared his feelings by this way, âEarlier I had lent my vocal for the title tracks of several plays. But in those plays, I had only given my vocal, nothing else. This time, the situation was absolutely different. With the participation of all a new song has been created. We can do a good job if we want. This title song is the best example of it.â
Naim said, âI can render well which is informed to my close persons. But I couldnât think earlier that I lent my vocal for a title song of a serial. It became a nice song. Listeners will enjoy the song.â
âIn a word, the song became outstandingly superb. I am really impressed with the title song,â said actor Arfan while sharing his feelings in this regard.
Title of the song is Kon chokh-e chokh rakho bondhu, kon poth-e jao ogo bondhu, khunji sarabela tomai.
Produced by Maasranga Production the serial Bachelor is being made soon to air on RTV, said its director Shuvo.Â Â