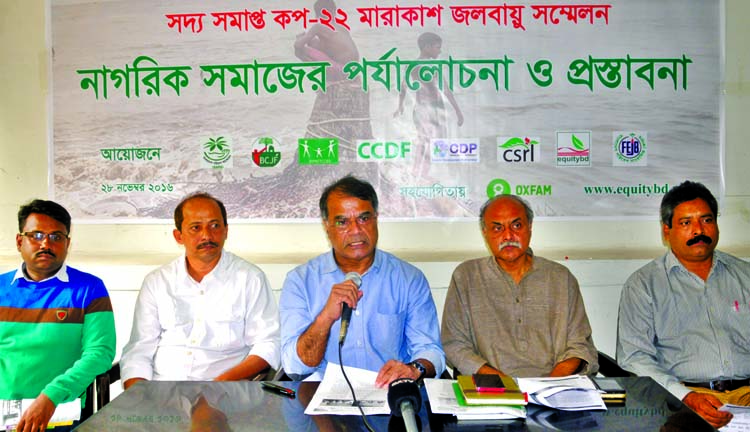 Chief Moderator of Equitybd Rezaul Karim Chowdhury speaking at a prÃÂ¨ss conference on just concluded \'22nd Conference of Parties (CoP) on Climate Change held in Morocco and Thoughts of Citizens Society\' at the Jatiya Press Club on Monday.

A network of several civil society organizations on Monday suggested formation of an independent climate change commission that would negotiate and handle issues related to global warming on Bangladesh's behalf internationally.
It also expressed deep frustration over the achievements from the just concluded 22nd conference of parties (COP) in Morocco since it has not been able to fulfill the needs and demands of the least development countries (LDCs) and most vulnerable countries (MVCs) that include Bangladesh.
The observations were made at a post-COP press conference titled 'Outcome of the CoP22: Analysis and proposal from Civil Society' held at the Jatiya Press Club in the city, said a press release.
The network observed that the nitty-gritty of a clear roadmap for the implementation of the Paris Climate Agreement was supposed to be finalized in COP22, but the large congregation has yielded little or no tangible result to be optimistic and move forward.
Rezaul Karim Chowdhury, a campaigner in the field, said despite having meritorious and skilled government officials in Bangladesh negotiation team, a clear lack of political guidance has weakened national position in the conference.
He said climate change was not an issue of the Ministry of Environment and Forest alone, rather like the Philippines, an independent Climate Change Commission should be formed and given the responsibility to protect national interest.
Mujibul Haque Munir, an executive of EquityBD, said there have been serious elements to be frustrated over the outcome of this year's climate conference since tendency of avoiding responsibilities from rich countries to the climate vulnerable countries were seemingly acute. He said rich countries did not even provide any clear roadmap for the 100 billion US dollar climate fund yearly from 2020.
"They did not agree on providing fund under the Loss and Damage issue. They made merely a commitment of 81 million US dollar for the adaptation only. This type of position by the rich countries will virtually lead to 'climate genocide' in LDCs and MVCs."
Pardip Kumar Roy, an executive of CSRL, said the LDCs and MVCs clearly expect a leadership role of Bangladesh in the climate change negotiations, for which Bangladesh should be well prepared, active and vocal in time.