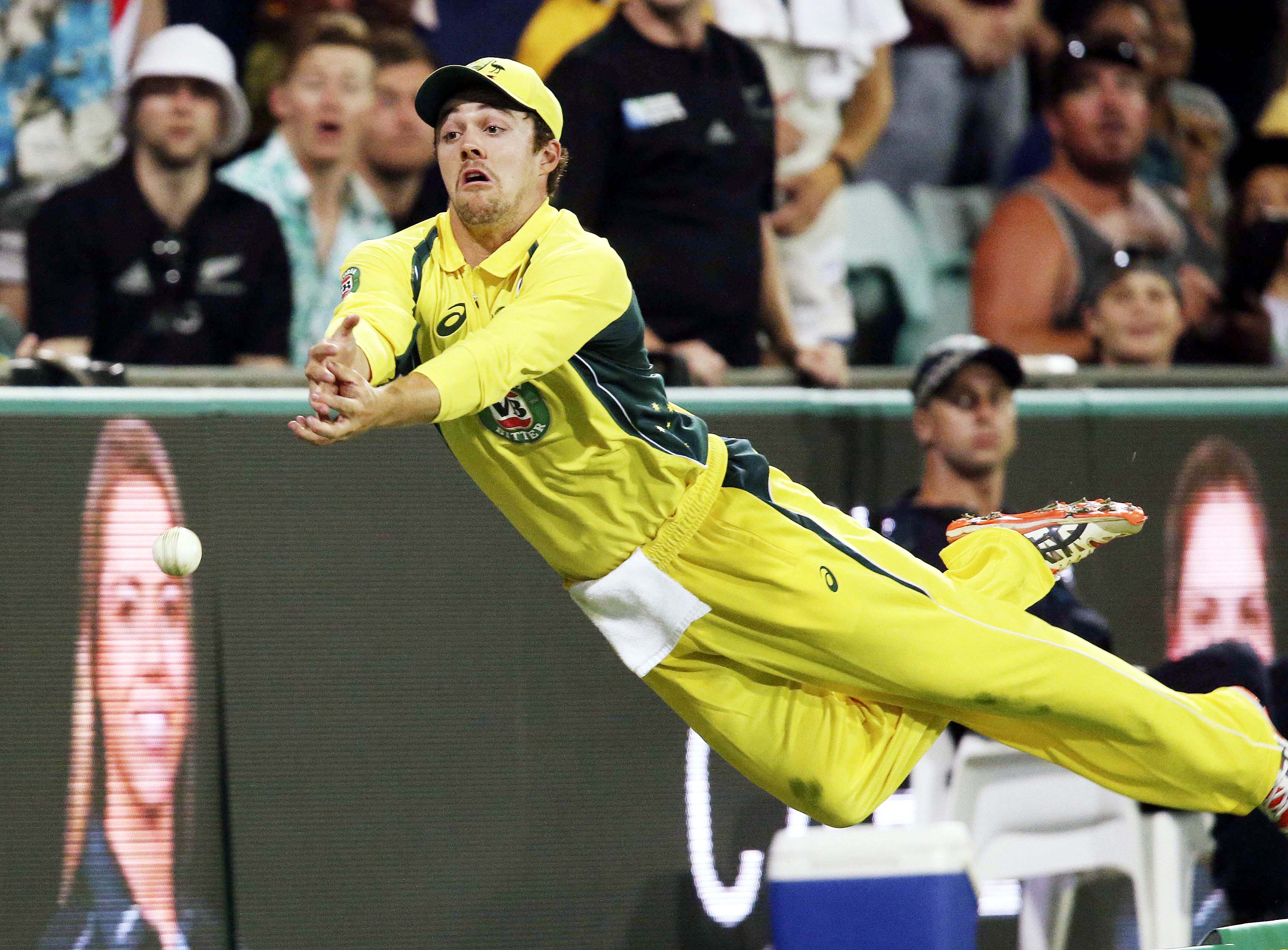 Australia\'s Travis Head dives in an attempt to catch the ball at the boundary during their One Day International cricket match against New Zealand in Sydney on Sunday.

Steve Smith hit a record-breaking century and took two superb catches as Australia beat New Zealand by 68 runs in the Chappell-Hadlee Trophy one-day series opener in Sydney on Sunday.
The Australia skipper smashed 164, the highest one-day international score at the Sydney Cricket Ground, to lead Australia to 324 for eight.
Man of the match Smith struck 14 fours and four sixes in his seventh ODI century after winning the toss to give the Black Caps a tough target to chase down.
The Kiwis were dismissed for 256 in 44.2 overs.
Smith's knock, the seventh highest by an Australian in a ODI, surpassed South Africa's AB de Villers 162 at the same ground in last year's World Cup.
It was also the joint-highest by an Australia captain. Ricky Ponting also made 164 against South Africa in Johannesburg in 2006.
Smith underlined his man-of-the-match qualities with two decisive catches in the Black Caps innings.
It was his throat-high catch at slip that got a big breakthrough, dispatching New Zealand skipper Kane Williamson for nine.
He later latched onto a flying one-handed screamer to dismiss BJ Watling for six off Mitchell Marsh, hurling himself to his left in the gully for a stunning catch.
Opener Martin Guptill raised his 11th ODI century with a six off Marsh over long-on off 93 balls and was his side's major hope of reeling in Australia's huge target.
But leg-spinner Adam Zampa coaxed Guptill into a false shot to find fielding substitute Glenn Maxwell at mid-wicket and was on his way for 114 off 102 balls in the 33rd over.
Jimmy Neesham put on 92 runs for the third stand with Guptill before he holed out to Hazlewood off Mitchell Starc in the 22nd over.
- On the up -
Smith's top-ranked team suffered a 5-0 ODI series drubbing in South Africa in October and earlier looked shaky again when reduced to 92 for four in the 21st over.
But Smith, who could have been out three times, led a swashbuckling recovery and thwarted opposition bowlers to put his side in the ascendancy.
"I had a bit of luck, but you have to take that and make the most it," Smith said after his innings.
"Nice to get a big score on my home ground. I love batting here, it's a great place to play and great to play in front of my family."
Smith was finally out three overs from the end when he skied Trent Boult to Colin Munro at midwicket.
Smith was supported by 52 from newcomer Travis Head, who was dropped by Matt Henry on nine, while wicketkeeper Matt Wade clobbered three sixes off a Jimmy Neesham over on his way to 38 off 22 balls.
Smith gave New Zealand two chances in Boult's third over.