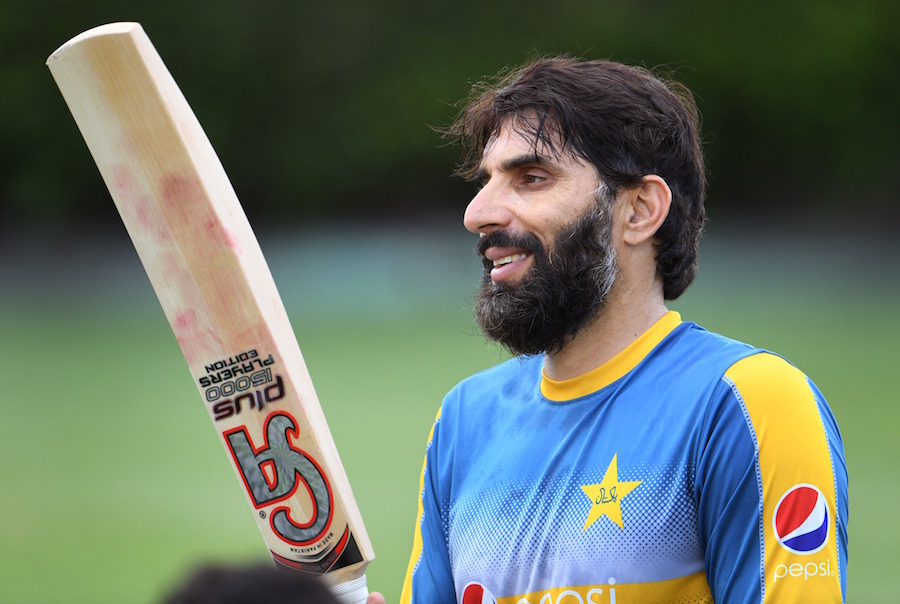 Pakistan cricket captain Misbah-ul-Haq inspects his bat during a training session at the SCG in Sydney on Monday.Pakistan take on Australia in the third cricket Test match starting today (January 3).

All-rounder Hilton Cartwright will make his Test debut among two changes in the Australia team for this week's final Test against Pakistan in Sydney, captain Steve Smith said Monday.
Zimbabwe-born Cartwright and left-arm spinner Steve O'Keefe replace Nic Maddinson and Jackson Bird in the team that demolished Pakistan by an innings in Melbourne last week to clinch the three-match series.
"Cartwright is an extra bowling option to go with the two quicks and the two spinners," Smith told reporters.
"It just adds a little bit to the bowling stocks, and he deserves an opportunity to play at number six."
The 24-year-old Cartwright is a batting all-rounder who bowls medium pace and will support front-line fast bowlers Mitchell Starc and Josh Hazlewood.
"He's improved (his bowling) a lot over the last year or so. He's gained 10 kph," Smith said of Cartwright.
The need for a second spinner in Sydney had been flagged by selectors, with O'Keefe getting the final nod over Ashton Agar.
"We're playing the two spinners, traditionally out here it does take some spin," Smith said.
O'Keefe will partner veteran spinner Nathan Lyon, who cemented his place in the team with a crucial three-wicket spell on the final day of the Melbourne Test.
O'Keefe has played three Tests, including in Sydney against the West Indies last season, and partnered Lyon in the first Test in Sri Lanka in July before injury ruled him out for the remainder of the series.
- 'Eye on India' -
Explaining Agar's inclusion in the expanded squad, Smith said: "It was to bring him into the mix and have those three spinners working together.
"I think the selectors probably have an eye on India and the guys that are possible to be there.
"I think it was just a good opportunity for those three to come together and do a little bit of work together."
Cartwright said he was ready to step up with the ball.
"I can definitely contribute overs during a game," Cartwright told reporters on Sunday.
"That's always been a part of my game. The bowling's been there. I've just been trying to get it to work as close to (as good) as my batting."
While Cartwright has taken only 14 Sheffield Shield wickets at 42.50 in his career, he is averaging 36.67 with the bat in the Shield so far this season, including three half-centuries.
Smith said pace bowler Bird could consider himself unlucky to miss out after taking 13 wickets in the last three Tests.
"I thought he bowled particularly well in Melbourne but, look, conditions sometimes change the team," Smith said.
"We've gone with two spinners on this occasion and it's unlucky for Jackson."
Australia are chasing a 3-0 whitewash in the Test that starts in Sydney on Tuesday.
Australia: David Warner, Matthew Renshaw, Usman Khawaja, Steve Smith (capt), Peter Handscomb, Hilton Cartwright, Matthew Wade, Mitchell Starc, Steve O'Keefe, Josh Hazlewood, Nathan Lyon.