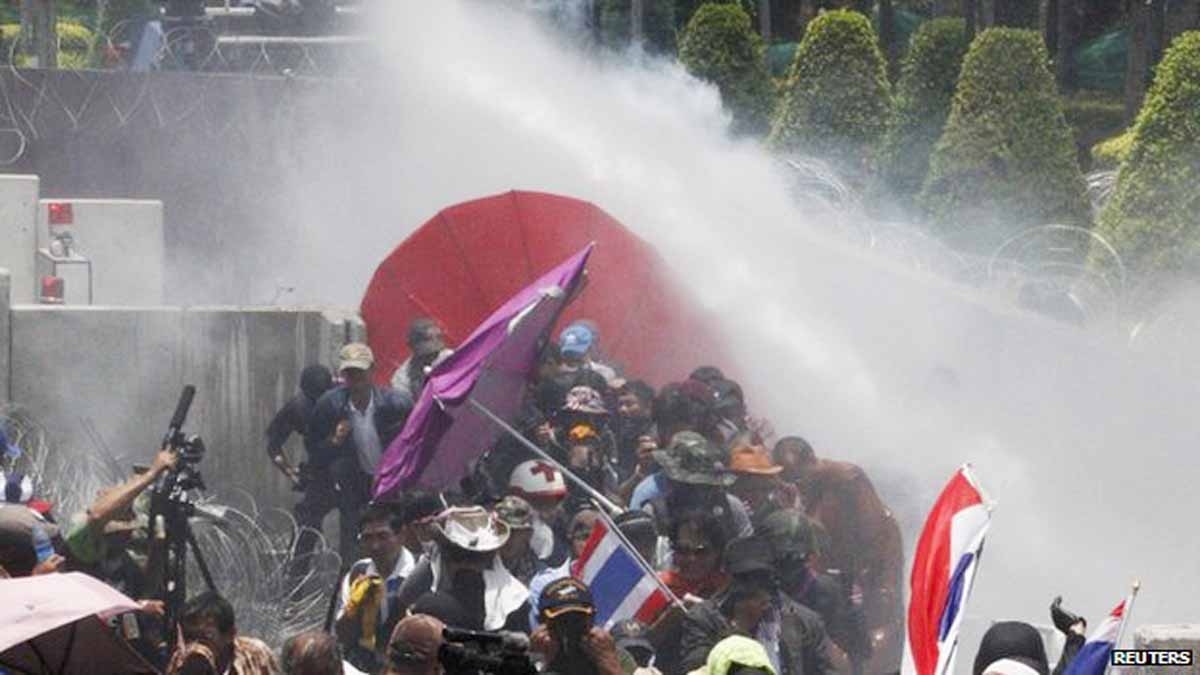 Thai police have fired water cannons and tear gas at protesters in Bangkok, two days after a court ousted Prime Minister Yingluck Shinawatra.Hundreds of protesters have been holding a rally outside a government compound in the city.Ms Yingluck was ordered to step down on Wednesday over the illegal transfer of her security chief. Another court has indicted her for negligence.The protesters want the government out and the political system reformed.At least five people were injured outside the Centre for the Administration of Peace and Order when they tried to topple concrete barriers that were topped with barbed wire, the Associated Press news agency said.Thai newspaper The Nation reported that protestors also attempted to occupy television stations and force them to air their announcements. Police in riot gear have been posted outside the stations.It was as though we had gone back five months. There was Suthep Thugsuban, marching with his entourage through central Bangkok, once again promising a "final push" - his ninth by my count - to oust the government. For the past three months his PDRC movement had dwindled to a core of mainly southern tough guys, camped out in a city park.One of his principal targets, Yingluck Shinawatra, was finally forced from office this week, along with nine of her ministers, some of them top hate figures for the PDRC.But the failure of the Constitutional Court to plunge the knife in the whole way, and take out the entire cabinet, has left PDRC followers dissatisfied. Their goal, an appointed government of "good men" to cleanse the political system in such a way as to cripple Ms Yingluck's election-winning party machine, remains unfulfilled. The resumption of their rallies is to remind Thailand that they have not gone away, that their job is not done.That job, though, will have to be accomplished either through yet more legal cases against the remaining ministers, and perhaps against MPs and senators in the governing party as well, to weaken its electoral prospects, or military intervention. The armed forces have shown no appetite for a coup yet, conscious of the certain backlash from Ms Yingluck's supporters, but that could change if there are violent clashes or, eventually, if the crisis just cannot be resolved.The protesters - mostly from the middle class and urban elite - say Ms Yingluck's government is controlled by her brother, ousted leader Thaksin Shinawatra.They say Shinawatra family money has corrupted Thailand's democracy and want an unelected "people's council" to step in.Ms Yingluck's Pheu Thai party, however, remains very popular in rural areas. It was widely expected to win a snap election called in February - which was disrupted by the protesters and subsequently annulled.Ms Yingluck's party caretaker government remains in place and says it is working towards a 20 July election.Early on Friday, protest leader Suthep Thaugsuban called on supporters to rally at several sites in Bangkok."We will regain our sovereign power and set up a people's government and a people's legislative council," Suthep said as he led a march.