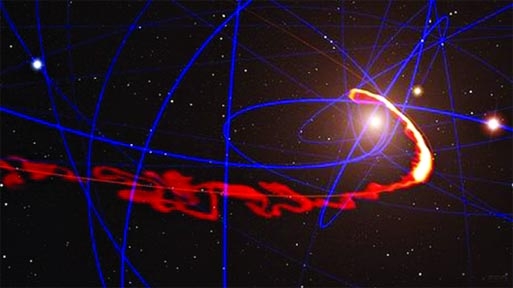 Astronomers are getting ready for their best ever glimpse of the mysterious black hole at the heart of our galaxy.
"Fireworks" will flare if it gobbles up a giant gas cloud which is drifting perilously close.
A collision is now likely in spring, according to scientists at the American Astronomical Society meeting.
Stargazers will be able to see the climax on a new public monitoring website.
"This could be our black hole's biggest meal in hundreds of years," said Leo Meyer, of the University of California, Los Angeles.
"It might bring spectacular fireworks - and we want everybody to watch."
Front row seats
The collision could give astronomers a unique window on one of the universe's great enigmas.
Black holes are so dense that not even light can escape them, once it passes their event horizon (point of no return).
They can only be observed indirectly - from brief flashes of radiation released by matter falling in.
The giant gas cloud G2 is three times the mass of Earth. It was first spotted in 2011 hurtling towards Sagittarius A* - the black hole in our galactic core.
Impact is now just a few months away. If the gas drifts close enough it will heat up, releasing great flares of X-rays, which shed light on the black hole's properties.
Astronomers have already secured front row seats. Dr Meyer's team is tracking the cloud's approach using the Keck Observatory in Hawaii.
They can see it "stretching like spaghetti" as the black hole tugs at its head, now moving much faster than its tail.
And while Keck watches the cloud, Swift is watching the black hole. Nasa's X-Ray space telescope is poised and primed to catch the first glimmers of an encounter.
"Everyone wants to see the event happening because it's so rare," said Nathalie Degenaar, Swift's principal investigator.
Sagittarius A* lurks 26,000 light years away in the Milky Way's innermost region.
Viewed from Earth, it is in the southern summer sky near the constellations Sagittarius and Scorpius.
Even for a black hole it is dim - about a billion times fainter than others of its "supermassive" type.
And this makes it something of a mystery.
"Currently it's not easy to see at all. But if the gas cloud suddenly feeds it with much more mass, you might get fireworks. And with that, you can test all sorts of theories," said Dr Meyer.
Black holes are thought to play a crucial role in the life cycles of galaxies.
They eat matter from their surroundings and blow matter back. This influences how stars are formed, how the galaxy grows, and how it interacts with other galaxies.
To get a sense of the typical feeding habits of Sagittarius A*, the Swift team has been making regular observations since 2006.
Every few days, their spacecraft turns toward the galaxy's core and takes a 17-minute-long exposure.
To date, they have detected six strong flares where the black hole was 150 times brighter for a couple of hours. But these are mere flickers compared to the jets that could erupt from G2 - the display could last for years.
Exactly how dramatic it transpires to be depends on what's inside the cloud.
If it is mostly hydrogen gas, the X-rays will glow for years to come as the black hole slowly swallows it.
But there is another possibility - the cloud could be hiding an old star. In which case, the big dinner date could be an anticlimax.
The black hole may slurp a little from the cloud while the star slips on by at a safe distance, dense enough to escape its gravity.
"I would be delighted if Sagittarius A* suddenly became 10,000 times brighter. However it's possible it will not react much - like a horse that won't drink when led to water," said Jon Miller, of the University of Michigan.
"Will there be fireworks or not? We have to wait and see. There is no smoking gun that can tell us yet," said Dr Meyer.
"But even if the odds are against it, you still have to look, because if you do see something it could be spectacular."