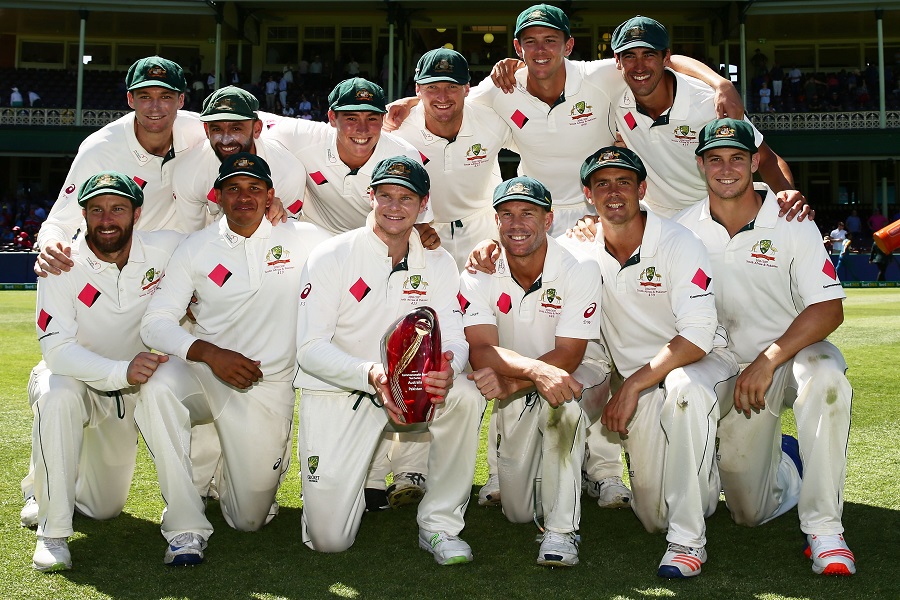 The players of Australia pose with the trophy after Australia beating Pakistan 3-0 in the series after the 5th day of the 3rd Test between Australia and Pakistan at Sydney on Saturday.

Australia clinched a series clean sweep with an emphatic 220-run win over Pakistan in the third Test in Sydney on Saturday.
The tourists were all out shortly before tea on the final day for 244 chasing 465 runs with paceman Josh Hazlewood and spinner Steve O'Keefe both snaring three wickets.
Pakistan's hopes of holding out for a draw evaporated with the dismissals of leading series runscorer Azhar Ali and veteran Younis Khan before lunch.
Wicketkeeper Sarfraz Ahmed topscored with a fighting unbeaten 72 off 70 balls.
Australia completed a series clean sweep after a 39-run win in the first Gabba Test and an innings and 18-run victory in Melbourne last week.
It was Pakistan's 12th straight defeat since their last Test win in Australia in Sydney 22 years ago.
Dynamic opening batsman David Warner was named man of the match for his scintillating hundred before lunch on the opening day, while skipper Steve Smith was announced as the official player of the series.
"I'm really proud of the way the boys have played in the last few weeks," Smith said.
"I don't think Davy Warner knows any other way and he set the tone for us straight up in the first and second innings."
Pakistan skipper Misbah-ul-Haq said his team never recovered from their shattering innings defeat to lose the series in the second Melbourne Test.
"The last day of the MCG was the biggest disappointment of the tour and we got demoralised from that and could not recover. This is how it is. Australia is not an easy place," Misbah said.
The highest target successfully chased down in the fourth innings at the Sydney Cricket Ground was Australia's 288 for two against South Africa in 2006.
The tourists lost four wickets in Saturday's first session after resuming at 55 for one.
Azhar Ali lasted just six balls into the final day before he was out in a soft dismissal on his overnight score of 11.
He tried to work Josh Hazlewood to the leg-side only to bunt the ball back to the bowler for an easy return catch.
Azhar finished as the highest Pakistan runscorer in a series in Australia with 406 at 81.20.
Babar Azam followed in Hazlewood's next over, trapped leg before wicket for nine to end a disappointing series with a total of just 68 runs from six innings.
Younis Khan missed out on becoming the first Pakistan batsman to reach 10,000 Test runs when he was caught in the deep off spinner Nathan Lyon for 13.
Younis, who scored an unbeaten 175 for his 34th Test hundred in the first innings, did not get enough on a Lyon delivery and lobbed to Hazlewood at mid-on.
It was a significant wicket for Australia following on from the first-over dismissal of Azhar to have Pakistan plunging towards defeat.
Nightwatchman Yasir Shah's 93-ball defiance ended a half-hour before lunch when he was snapped up the slips by fielding substitute Jackson Bird off left-arm spinner Steve O'Keefe for 13.
Asad Shafiq went soon after lunch bowled by Mitchell Starc off a thick inside edge for 30.
Misbah resisted for 98 balls before he went after O'Keefe and skied to the safe hands of Lyon at mid-off for 38 -- his highest score of a struggling series.
Misbah, at 42 and playing his probable last innings in Australia, was given a generous ovation as he left the SCG.
Wahab Riaz cracked three fours off nine balls before he lost a review for caught behind off O'Keefe for 12, and O'Keefe ran out Mohammad Amir for five to put Australia on the brink of victory.
Hazlewood claimed the last wicket and his third of the innings when he had Imran Khan caught in the slips for a duck.
Australia tour India next month for a four-Test series, while Pakistan do not have any Tests scheduled until April, when they will tour the West Indies for a four-match series.