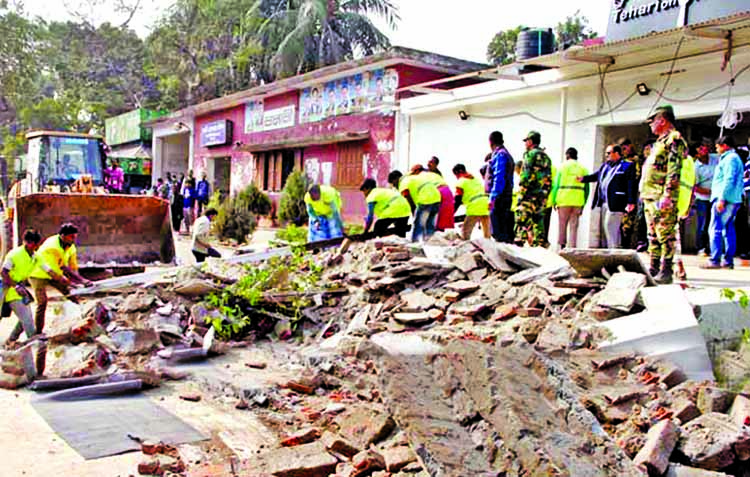 The illegally grabbed establishment on the railway land near the Banani Rly Station in city being bulldozzed by DNCC authorities on Thursday.

Two buildings near the rail station in Banani have been demolished in the presence of Dhaka North Mayor Annisul Huq for illegal construction on land belonging to the railway.

But rail officials present at the scene objected to the demolition, saying that the land had been legally leased from the railway for the construction of the buildings.

Dhaka City Corporation Executive Magistrate Mohammad Sajid Anwar led the demolition operation on the 'Cafe Banani' and 'Tehari on Wheels' restaurants in the capital on Thursday.

At the request of the magistrate, the goods and furniture inside the stores were removed prior to the bulldozers commencing demolitions.Â Â Â  Although the land belonged to the railway, said Dhaka North Mayor Annisul Huq, the buildings had not received the permissions required from the Dhaka City Corporation.

The mayor also asked Railway Division Property Official and Executive Magistrate SM Rezaul Karim how he had been granted permission to lease the non-commercial land to two restaurants.

"We followed regulation in doing this, sir," responded Rezaul.

Annisul Huq also wanted to know whose signature had gone on the leases to the two restaurants.

"I asked the minister and I asked the secretary, but they did not know anything about the matter."

Various ministries around the city were giving away land in such a manner, the mayor told reporters, and the burden of the problem ultimately fell on the city authorities.

"They see this as a commercial area. How did they license it out without the permission of the city corporation, I don't know. We haven't provided any licenses, and yet this has become a commercial area." The Cabinet decided to remove all buildings illegally constructed on non-commercial land, the mayor said.

"Buildings will even be demolished in commercial areas if they have been built without the appropriate permissions. Even then, one site had done so."

The mayor also requested the different ministries to check with the city corporation regarding allotments.

"No permissions can be granted without the cooperation of the city corporation. We beg every ministry, please check whatever allotments you have given. The honourable prime minister has said so herself: no illegal buildings will be allowed." At this Railway property official Rezaul told reporters, "Not all files reach the minister or the secretary, so they don't know about them. But all of the allotments were made according to the rules. This is the railway's land. The railway has its own policies for granting allotments. The matter had been settled according to those policies."

"The city corporation does not have the jurisdiction to conduct demolitions on railway land. If any illegal buildings have been constructed they should have informed the railway through a letter and we would have conducted the demolitions ourselves," he said.

The demolitions caused damage to the railway light posts, restroom and systems for online ticket sales, Rezaul objected. "We had a gentleman's agreement," he said. "That they would demolish the structures that went beyond our allotments ... and the rest will be left alone. But they've demolished all of them."

Mayor Annisul Huq alleged that the restaurants occupied land outside the area allotted by the railway.

The extensions of the Boishakhi and Purobi hotels in Kakoli were also demolished. The demolition of other illegal storefront constructions had also been planned, but was postponed for two days at the request of owners. The mayor ordered these constructions to be demolished in two days' time.