Moutushi-Partho-Mithila together in same play 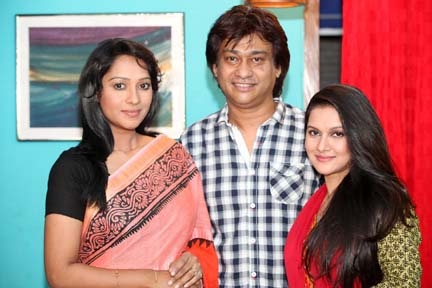 Popular TV actress and model Mithila was out of acting for last two years. She took rest from acting before giving birth a baby. In last April 30, her baby completed one year. For this reason, Mithila is now wanted to return to acting. She has returned to acting by Redoan Roni directed a TV play titled Ayna Mohol-e Ayna.
Popular singer cum TV actor Partho Barua and popular TV actress and model Moutushi Biswas also acted with her in this play.
Moutushi Biswas was also out acting for several months due to an accident. She was taking rest at her residence in this regard. She has also returned to acting few days ago.
While talking about the play director Redoan Roni told this correspondent, âAyna Mohol-e Ayna is a psycho-drama. To know the inner meaning of the play, viewers will have to watch the play on the screen. I think they (viewers) will enjoy the play.â
Roni has made the play to air on RTV on the occasion of Eid-ul-Fitr. Shooting of the play was wrapped up on May 9, Roni said.
While talking about the play actor Partho Barua said, âEarlier I had worked against Mithila in a play. But it was my first work with Moutushi in a TV play. I have enjoyed working with her in the play.â
Moutushi shared her feelings by this way, âStory of the play is really nice. It was my first work not only with Redoan Roni bhai and Parthoda but also to work with Mithila. It really became a nice play.â
However, Mithila said, âAfter many days I have returned to acting. I have tried my level best effort to express my role in the play. Viewers will give their judgments after watching the play and my acting.â
Produced under the banner of Popcorn Entertainment before this play, Partho Barua and Mithila earlier worked in play titled Tor Jonno Priyota under the direction of Afzal Hossain Munna. It was aired on ATN Bangla in 2010.
Meanwhile, Partho last worked against Tarin in a play titled Aporahno under the direction of Shakhawat Hossain Manik.
On the other hand, Moutushi last worked in Masud Sezan directed a drama serial titled Cholitechhe Circus.Â