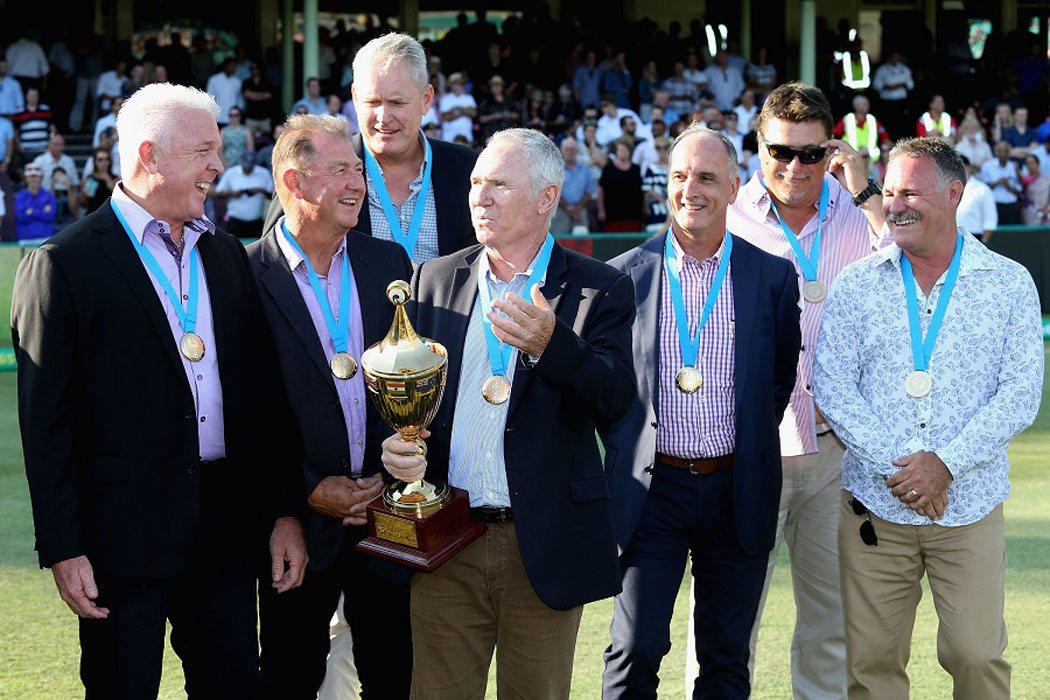 The 1987 Cricket World Cup winning squad pose for a photo after receiving their medals during game four of the One Day International series between Australia and Pakistan at Sydney Cricket Ground on Sunday.

The Australian team which won the one-day international World Cup in 1987 was presented with medals in Sydney on Sunday.
The first Australian squad to win the World Cup received winners' medals during the break between innings in the match between Pakistan and Australia.
The side was captained by Allan Border and coached by Bob Simpson and beat England by seven runs in a tense final in what was then known as Calcutta, sparking a golden era of Australian cricket but receiving only a trophy.
Australia have since won four more World Cups.
Cricket Australia chairman and International Cricket Council (ICC) director David Peever made the presentation in front of a healthy crowd at the SCG.
In June last year the ICC Chief Executives' Committee decided to award medals to players and support staff of all World Cup-winning squads who did not receive them at the time of their successes. The West Indian team from 1975 and Sri Lankan unit from 1996 will also receive medals. Border was delighted with the initiative.
"I'm so proud that the players and support staff of our 1987 win have been recognised in this way," he said.
"We never thought about medals or anything like that at the time - it was just about winning the tournament - but to get this acknowledgement now is a recognition of what we achieved during that month in India and Pakistan and we're grateful to Cricket Australia and the ICC for this being done.
"It's terrific to get together again as a group, relive those days and have a laugh but also realise what it was we achieved in becoming the first Australia side to win the World Cup."