Desperate search at Soma pit on

238 killed in Turkey coal mine disaster 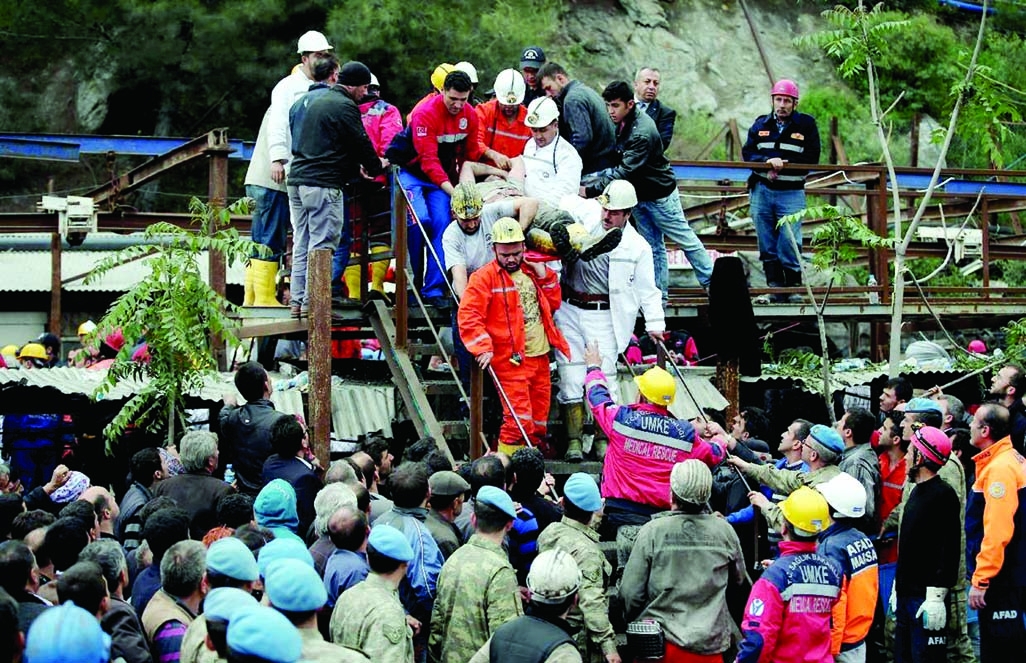 Rescue workers carry a rescued miner from the mine in Soma, western Turkey, early Wednesday. Rescuers desperately raced against time to reach more than 200 miners trapped underground after an explosion and fire at a coal mine in western Turkey killed at l

Rescuers are hunting desperately for scores of Turkish coal miners still missing after an explosion caused a pit to collapse, killing at least 238.Dozens escaped the pit in the western town of Soma, but officials say about 120 are still unaccounted for.On a visit to Soma, PM Recep Tayyip Erdogan offered his condolences, and said a thorough investigation into the tragedy had begun.Frantic relatives have gathered at the mine, waiting for news of loved ones."My son was two months away from retirement," sobbed an elderly woman waiting at Soma's hospital. She held up two fingers to make her point and closed her eyes to stop herself from crying any further.The hospital grounds have been taken over by the families of the trapped miners. Their wait has now become a vigil. Some sit and stare at the ground. Others sob. Every few minutes paramedics clear the crowd to take away someone who has fainted.Dozens press up against the blue police barricades set up at the entrance to the hospital. They're desperate for news of the trapped miners. And they have nowhere else to go.As ambulances took away an increasing number of bodies, some of the bereaved wailed uncontrollably and were carried away by their families.More than 350 miners were rescued, but no survivors have been found in the last few hours.Erdogan said 80 of them had been treated for injuries, none of which were serious. Nineteen of these had already been discharged from hospital. Earlier he announced three days of mourning for the victims.The BBC's James Reynolds in Soma says family members of missing miners are gatheredÂ  at the hospital. They told him they would not move from there until they got information about their loved ones.Meanwhile, protesters angry at the disaster took to the streets of Istanbul and Ankara on Wednesday.Police fired tear gas and water cannon at about 800 protesters as they tried to march from a university in Ankara to the energy ministry. There were also reports of clashes in Istanbul. Energy Minister Taner Yildiz said 787 people had been inside the mine when an electrical fault triggered the blast.About 120 are still thought to be in the mine, but he said hopes were fading of finding any more survivors.He added that carbon monoxide poisoning had claimed many lives. Oxygen was being pumped into the mine to help those still trapped. The electrical fault triggered a power cut, making the mine cages unusable. Those trapped are reported to be 2km (1.2 miles) below the surface and 4km from the mine entrance.The blast happened at about 12:30 GMT on Tuesday.TV footage overnight showed rescuers helping workers from the mine, their faces and hard-hats covered in soot and dust. Some were carried on stretchers to waiting ambulances.But by mid-morning, reporters at the scene said only the dead were being recovered.The nightmare is that so many obstacles stand in the way of efforts to rescue any survivors.Most seriously, the explosion cut the power supply and put the lifts out of action. Lighting would have gone off, plunging the tunnels into darkness and stopping the ventilation system. They're pumping in air, but will it be enough to stop a rapid drop in oxygen? Freshly exposed coal sucks in oxygen so new supplies are vital. The lack of ventilation also means levels of potentially toxic carbon monoxide and carbon dioxide have been rising. And all the time smoke would have rapidly built up after the explosion, cutting visibility, making access far harder, and sadly reducing the chances of getting people out alive.Police were keeping the crowds back to allow emergency services in and out of the area.Sena Isbiler, a mother of one of the miners, stood on top of piles of wood, anxiously craning her neck to see those being led out of the mine. "I have been waiting for my son since early afternoon," she told AFP news agency. "I haven't heard anything about him yet." The mine's owners, Soma Komur Isletmeleri, said they would investigate the accident, adding that the accident occurred despite the "highest safety measures and constant controls"."Our main priority is to get our workers out so that they may be reunited with their loved ones," the owners said in a statement. Coal mining is a major industry in the Soma area, helping to supply a nearby lignite-fired thermal power plant, but safety has long been a concern. An MP with Turkey's opposition CHP party has accused the government of rejecting a recent proposal for a parliamentary inquiry into mine accidents in Soma.Ozgur Ozel told Today's Zaman newspaper that the motion had substantial support among opposition parties.Our correspondent says Prime Minister Erdogan will see this tragedy as a test of his reputation, and he will be aware that the previous government lost an election after being seen to have mishandled the 1999 earthquake.Turkey's worst mining disaster was in 1992, when 263 miners were killed near Zonguldak, on the Black Sea.