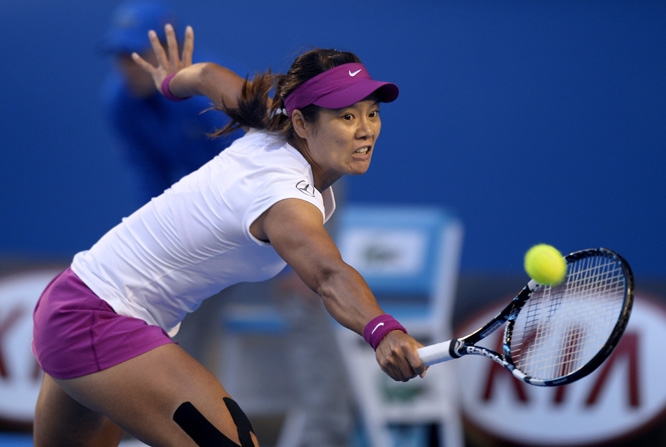 Li Na of China makes a backhand return to Dominika Cibulkova of Slovakia during their women\'s singles final at the Australian Open tennis championship in Melbourne, Australia on Saturday.

China's Li Na won her second Grand Slam title with victory over Slovakian Dominika Cibulkova at the Australian Open on Saturday.
Li, seeded fourth, came through an edgy first set from both women to dominate the second and win 7-6 (7-3) 6-0.
It was the 31-year-old's third Australian Open final and brings her a second major title after the 2011 French Open.
Already a popular figure at Melbourne Park thanks to her previous success - and entertaining on-court interviews - Li was urged on by a large contingent of Chinese supporters on Rod Laver Arena.
Seven years older, with a 4-0 head-to-head record and facing a player making her Grand Slam final debut, Li had been a strong favourite against 20th seed Cibulkova.
In the event, it was a difficult call as to who was the more nervous in the early stages of the match.
Cibulkova double-faulted twice to give up her serve in the opening game, but Li handed it back in similar fashion at 3-2 after a dreadful start that saw her make just two first serves in the first six games.
The pair had shared 30 unforced errors in that time, and it was a question of who could string together something approaching their normal game to take charge.
Cibulkova opened the door once again at 5-5 with a double fault but Li could not serve it out, struggling with her ball toss as a set point slipped by.
It was the Chinese player's aggressive start to the tie-break that eventually got her over the line, her backhand doing much of the damage as she moved into a 5-1 lead and sealed the set after a largely unconvincing 70 minutes.
With the tension lifted and now swinging more freely, Li found her range at the start of the second and swept a winner into the corner on her way to an immediate break.
The forehand that had been a liability at times in the first set was now a potent source of attack, and a barrage from that side took her to 5-0 within 20 minutes.
"Come on, Li, bagel her!" cried one voice from the crowd, keen for a love set, and she delivered.
A rasping backhand winner helped her to two match points and, when Cibulkova fired over the baseline on the second, Li raised her arms in delight at finally prevailing in a Melbourne final at the third attempt.