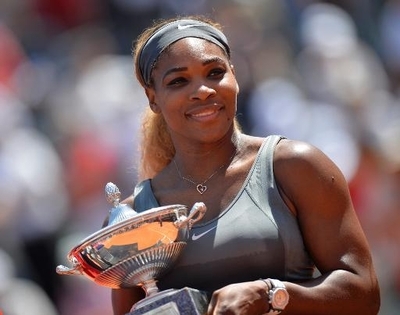 World number one Serena Williams overpowered home favourite Sara Errani to retain her Italian Open title on Sunday.
The American, 32, powered through 6-3 6-0 at Rome's Foro Italico and took her record on clay to 53 wins and two defeats since 2012.
She has now won 60 WTA titles, moving her into seventh in the all-time list.
Williams will head to the French Open, which begins next Sunday, as a strong favourite to successfully defend her title and win an 18th Grand Slam.
Errani, 27, had beaten world number two Li Na and world number eight Jelena Jankovic on her way through the Rome draw, but she was overwhelmed in the final.
Williams had won all six of their previous matches,Â  including a 46-minute victory the last time they met in the 2013 French Open semi-final, where the Italian won just one game.
Errani put up a better fight this time, though she displayed signs of nerves as the first Italian woman to reach the final since 1985. But despite the vociferous home-crowd support she could not consistently test Williams.
The American quickly moved out to a 3-0 lead and Errani's challenge was further hampered when she need a medical timeout at 5-3 down to treat a problem with her left hip or thigh.
With Errani unable to move properly, the second set resembled a gentle practice session more than a tournament final as Williams raced through it without losing a game.
"I really want to compliment Serena on the way she's played during the week and she's certainly one of the best in the world, if not the best in the world," said a tearful Errani.
"It's crazy for me that I got to the final this year. I never expected to manage to play such good tennis."
Williams said: "I'm also sorry for Sara today. She really played great all week."