Its not a coup, says C-in-C troops take over TV, Radio 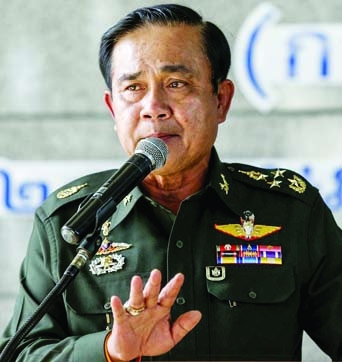 The Thai military has imposed martial law amid a political crisis "to preserve law and order", but says the surprise move is not a coup.In response, the acting prime minister urged the army to act "under the constitution" and "with no violence".Soldiers have taken over TV and radio stations, and blocked off roads in the capital, Bangkok.Martial law comes after months of escalating tensions between the government and the opposition.Correspondents say the move could enrage supporters of the government, especially if it is seen as amounting to a coup. The army has staged at least 11 coups since the end of the absolute monarchy in 1932.Army chief Prayuth Chan-Ocha called on rival parties to talk to each other and resolve the political crisis. Martial law would remain in place until "peace and order" had been restored, he told government officials on Tuesday.Soldiers have moved into the main government building in Bangkok, which has been unoccupied following months of violent demonstrations by opponents who want to be rid of an administration they say is corrupt.The military has also ordered media censorship in the interests of "national security".Both pro and anti-government protesters have been told not to march anywhere in order to prevent clashes.The army insists its imposition of martial law does not amount to a coup d'etat, and it is trying to operate with as light a footprint as possible.At Government House troops were able to retake the building from the anti-government PDRC movement without any fuss, although it is still surrounded by protest tents and stages.The muted reaction from both sides shows the military's low-key approach is working - for now. Both the government and its red-shirt supporters have accepted the army commander's word, that it is not taking over political power. The PDRC has cancelled rallies planned for Tuesday.But none of this resolves the intractable political conflict which has afflicted Thailand for eight years. Martial law was first announced on military-run TV. In its statement, the army stressed that the public need not panic. The announcement cited a 1914 law that allows the military to intervene during times of crisis.