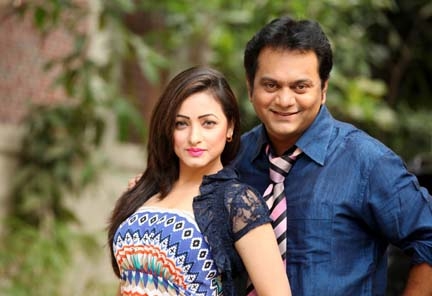 For first time popular actor and play director Mir Sabbir and popular model cum actress Sujana performed together as pair in a TV play titled Kajol Boro Bhalo Chheley.
Script of the play was written by Jakaria Showkhin, while it was directed by Sajjad Sumon. Shooting of the play was wrapped up in the cityâs Uttara area this week.
Main story of the play revolves with Kajol (Mir Sabbir). While asking him about the play Mir Sabbir said, âEarlier I had worked in several plays under the direction of Sajjad Sumon. Sajjad makes play very sincerely and carefully. Though the story of the play was very known to us but nobody earlier tried to make a play with such type of story. For this reason, Showkhin should get appreciation. Therefore, Sujana is very sincere to her work.â
Sujana shared her feelings by this way, âThough it was my first work against Sabbir bhai, but I didnât feel like that. He is very amicable, jolly and cooperative minded. I think the viewers will like the play due to its story and making.â
It may be mentioned that Mir Sabbir directed a drama serial titled Noashal is being aired on RTV now. Therefore, Sabbir acted drama serials Jogajog Golojog, Mamlabaaj, 100 Haat Durey Thakun and Agun Khela are being aired in different satellite channels now.
As a director, Sabbir came into limelight to make a serial titled Mokbul for ATN Bangla.
On the other hand, Sujana recently returned to Bangladesh after taking part in shooting of a faction play titled 36-Degree, directed by RB Pritom, and a 26-episode drama serial titled Otithi Pakhi, directed by Masud Sezan.
The play Kajol Boro Bhalo Chheley will go on air in any satellite channel on the occasion of ensuing Eid-ul-Fitr, said its director Sajjad Sumon.Â Â Â Â Â