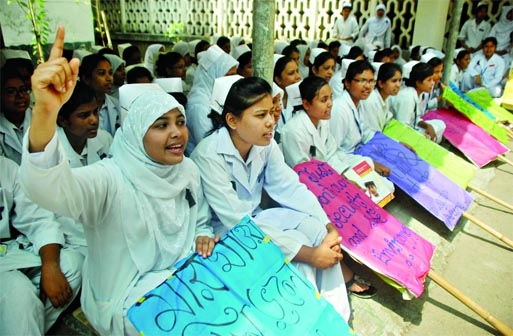 Nurses continued to their sit-in demo on Wednesday in front of DMCH protesting assault on fellow nurses in Sylhet by doctors and demanded to cancellation of certificates of responsible interns.

Students of the Sylhet Nursing College, defying authorities order to vacate dormitories, have continued their protest against an attack on apprentice nurses in the city's MAG Osmani Medical College and Hospital (MOMCH).Agitating students while carrying out a sit-in demonstration at the college on Wednesday, announced to continue their agitation until the attackers were brought to book. Nursing students in Dhaka and Chittagong too have condemned the attack and demonstrated protesting it.On Tuesday, the nursing college was declared closed for an indefinite period and students were asked to vacate dormitories by 5pm, which the students defied."We are holding a meeting with the students and we are hopeful of finding a solution," said Sylhet Nursing College's principal Shilpi Chakravarty. Authorities of the college and MOMCH went into a huddle with a delegation of nurses at the hospital to resolve the issue.On Monday, intern doctors at MOMCH had reportedly assaulted apprentice nurses.Six nurses, both male and female, were injured in the attack and one of them is reported to be in critical condition and is undergoing treatment at MOMCH.Students of the nursing college boycotted classes and exams in protest against the attack. They also stopped working at the hospital.