Autistic Australian is a talented artist 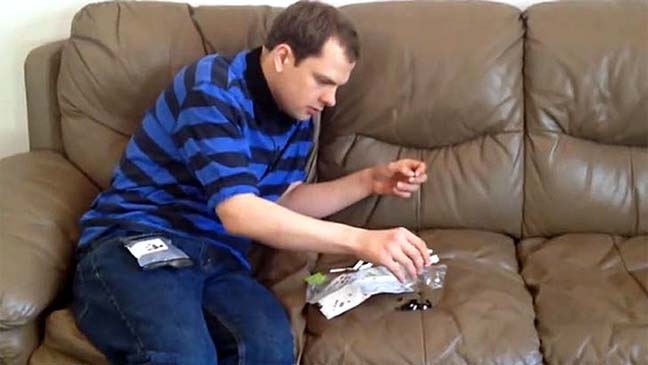 Life Desk :
The reason why his colorful work has such appeal cannot be explained by artist Tim Smart. Additionally, he cannot fathom how the cheeky superhero he first drew when he was a child, Laser Beak Man, has won fans around the world and become a television series.
Â "Drawing makes me really happy, doesn't it mum," is all he says, as his mother Judy sits beside him in Sydney's Hyde Park. "Colours can make me happy. Am I doing well mum?"
Smart, who turns 26 this month, was first diagnosed as autistic when he was three years old. At the time, his mother was told he would never talk, go to school or feel real affection for her. One doctor encouraged her to put him into an institution and move on.
Judy knew her son was intelligent and loving, but it wasn't until she began drawing pictures to communicate with him that he seemed to "switch on".
The first time she drew, Tim grabbed her hand and pushed it towards the pencil for her to pick it up and keep drawing. "And that in itself was a major interaction, he hadn't done that before."
The discovery was a breakthrough, meaning day-to-day activities such as going to another child's birthday party, which had once made Tim deeply anxious, became manageable once shown to him in pictures.
"Now I was able to show him the sequence of what you do-we go, we take the present, we blow out the candles, we sing 'Happy Birthday', and then we leave."
"And as soon as the candles were blown out we had to leave," she says, laughing. "But he didn't scream for the hour or so before that so it made a difference that way."
Once Tim starting drawing, it was quickly clear he had his own quirky style.
"I don't know that it was Picasso or anything like that, there was just something about it for a four-year-old," Judy says.
"What he tended to draw tended to have a lot of personality to it. And then he liked to watch me draw, which was a big thing because I couldn't maintain his attention on anything else."
'Have a filthy, disgusting birthday' -
When he was 11, Tim told his mum that he wanted to be his creation-Laser Beak Man-when he grew up. It was around this time Tim and his younger brother were going to a birthday party and set about making a card.
"We didn't have any money for the card. So we made the card." I said, 'We'll put Laser Beak Man on the front. And I said to Tim, 'What would Laser Beak Man say?' What does he say? "Have a filthy, disgusting birthday".
"And we put that inside and we gave it to our friend who happened to have a friend who worked in the disability arts scene who said, 'This is just brilliant'. You have to make cards of this.'"
For Tim, Laser Beak Man was an extension of his love for superheroes such as Batman, Spiderman, Superman and the X-Men.
"He's always in my paintings," he explains of the creations which often involve a pun-such as one called "Everyone is Beautiful" in which the superhero is surrounded by the number 1, or "Shut the Duck Up" which has a duck with its mouth tied shut and Laser Beak Man holding a cooked bird on a platter.
In another entitled "How to Make Mona Lisa Smile", Laser Beak Man is pictured mooning the famous subject as he paints her portrait.
Tim's work had instant appeal, and at 16 he was selected for the Very Special Arts Festival in Washington for people with disabilities. Judy mortgaged their house to make sure he could get there.
Since then, Tim, who uses pencils and crayons to create his bright designs on the family's kitchen table, has won fans such as Hollywood star Cate Blanchett and had a music festival staged in his honour in Nashville, Tennessee.
Laser Beak Man has also inspired an animated television series screened by the Cartoon Network and the Australian Broadcasting Corporation.
For Judy, one of the great things about Tim's art is that it has showed that acceptance of people with disabilities has improved.
"Lots of things have happened that we never thought would happen," she said. "Every day is exciting."
-Internet