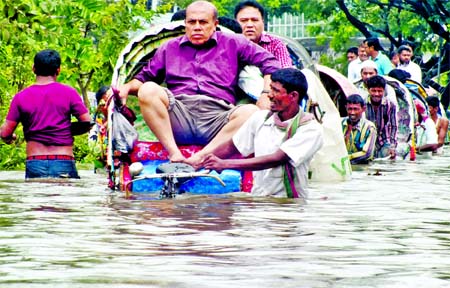 The main thoroughfares in Chittagong port city were inundated under waist deep water due to incessant rains triggered by Cyclone Mora for several hours. Only rickshaws are plying on water logging area in a desperate bid. This photo was taken from Agrabad

Incessant rains triggered by Cyclone Mora have left large swathes of Chittagong city inundated. Light rains started on Tuesday morning but turned heavy in the evening and continued through early Wednesday.
The weather office in Patenga has recorded 225.2mm rain in 24 hours since 9am Tuesday. Low-lying areas such as Sholoshohor, Agrabad, Halishohor, Chawkbazar, Bohoddarhat, Baklia and Arakan have gone under water.
People were seen wading through knee-deep and waist-deep water while some even took boats to commute. The port city slowed to a crawl after waterlogging made traffic congestion even worse.
Sanjay Chowdhury, an employee of a private company, alleged that public transports were demanding unusually high fares taking advantage of the situation.
Arakan Road was in the worst condition as the construction of a flyover there added to the troubles. WASA has also dug the road for repairs.
Cyclone Mora cut its path through Cox's Bazar-Chittagong coast on early Tuesday. Then it weakened into land depression in the evening and finally faltered in the Indian state of Tripura.
Boalkhali resident Shahdat Hossain was describing his own troubles of commuting to work as the road stretching from Kaptai to Bohoddarhat Bus Terminal was inundated. Residents of Agrabad CDA navigated through chest-high water, with some taking boats to run daily errands. Many others stayed indoors.
Rainwater seeped into the households as well, said Rashed Reza Dicken, assistant commissioner of Chittagong Tax Zone. "It was the worst waterlogging in four years."
Chittagong Port Police Station and Chittagong Fire Service offices remained waterlogged until midday.