They are in serial Kheya 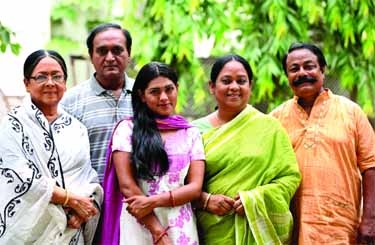 Director Sokal Ahmed is making a new drama serial titled Kheya now. In the serial, popular TV actress Nusrat Imrose Tisha is acting in the title role, Kheya.
Therefore, noted actors Raisul Islam Asad, Sharmily Ahmed, Al Mansur and Wahida Mollick Jolly are also acting in four other important roles in the serial.
Though Tisha earlier worked under the direction of Sokal Ahmed in a serial, for the first time she is acting in the title role of any serial under the same directorâs direction.
Main story of the serial was written by Anisul Haque. Sharmily Ahmed is acting in role of Tishaâs grandmother in the serial, while Raisul Islam Asad and Wahida Mollick Jolly are performing in role of her parents. Al Mansur is acting in role of Tishaâs maternal uncle in the serial.
While asking about this new serial Sharmily Ahmed told this correspondent, âMy role in the serial is very interesting. I like to read storybooks. But my grandsons and daughters change my books and also sometimes they change pages of the book, which were read by me earlier. This type of interesting incidents will be shown in the story of the serial, which will be enjoyed by the viewers. Therefore, I am really enjoying acting the serial.â
Raisul Islam Asad shared his feelings by this way, âSokal is trying to present the serial in an exceptional way. He also tries to present the story of the serial in different way to the viewers. I am giving him thanks in this regard.â
Tisha said, âIt is my first work in the title role under the direction of Sokal bhai. My role is very challenging and I am trying my level best to express my character properly in the serial.â
Producing under the banner of Versatile Media the 104-episode serial Kheya is being made to air on RTV. It is Versatile Mediaâs first produced serial.
On the other hand, besides acting in this serial, Tisha has also finished work of Sagor Jahan directed a sequel play titled Sikandar Box-er Hawai Gari. As usual, Mosharraf Karim acted against her in the play, Tisha said.