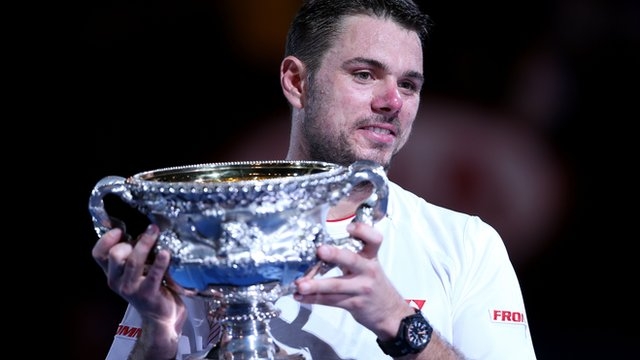 Switzerland's Stanislas Wawrinka won his first Grand Slam title with victory over an injury-hit Rafael Nadal in the Australian Open final on Sunday.
Wawrinka withstood a fightback from the world number one, who was struggling with a back problem, to come through 6-3 6-2 3-6 6-3.
The 28-year-old becomes only the second Swiss man to win a Grand Slam singles title after 17-time champion Roger Federer.
And he is the first man outside the 'big four' of Nadal, Federer, Novak Djokovic and Andy Murray to win a Grand Slam since Juan Martin Del Potro at the 2009 US Open.
Fortunes fluctuated wildly over the course of two hours and 21 minutes as Wawrinka opened in scintillating form before a tearful Nadal appeared close to quitting at two sets down, only to stage a remarkable recovery in the third.
The Spaniard, 27, showed great spirit to hit back once again from a break down in the fourth, but a forehand winner gave Wawrinka the decisive break at 5-3 and he served out the biggest win of his life with a love game.
"The last thing that I wanted to do was retire. No, I hate to do that, especially in a final," said Nadal, who revealed he felt the back issue in the warm-up.
Wawrinka had never won a set, let alone a match, in 12 previous attempts against Nadal, and was making his Grand Slam final debut against a man in his 19th.
But Nadal's travails in the second half of the match should not overshadow what was a magnificent performance from Wawrinka for much of the contest.