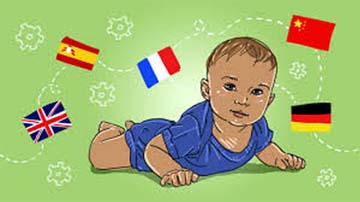 Life Desk :
New research indicates that speaking two or more languages helps the cognitive function of the brain from declining and helps the brain to age slowly. The research published in Annals of Neurology, a journal of the American Neurological Association and Child Neurology Society throws new light on this subject. This would mean that most Indians who speak more than one language possibly have a slow aging brain.
With more than 120 languages spoken in India, most individuals who have attended even a certain level of schooling and education speak two or more than two languages - one, their mother tongue and two, Hindi, English, or the native language of the area they live in. For example, a person with a Bengali father and a Malayalee mother living in Delhi will know at least three languages - Bengali, Malayalam, and Hindi / English.
So does that mean that they will have a slow aging brain? Possibly, says the new research.
Being bilingual can make you smarter. It has a profound effect on the cognitive function of the brain by not only improving cognitive skills not related to language but also delaying dementia as you grow old. This was already proved by earlier research.
'To maintain the relative balance between two languages, the bilingual brain relies on executive functions, a regulatory system of general cognitive abilities that includes processes such as attention and inhibition. Because both of a bilingual person's language systems are always active and competing, that person uses these control mechanisms every time she or he speaks or listens. This constant practice strengthens the control mechanisms and changes the associated brain regions,' explains Viorica Marian in her article published in the journal Cerebrum. She is chair of the department of communication sciences and disorders at Northwestern University and associate professor of communication sciences and disorders, psychology, and cognitive science.
But do people improve their cognitive functions through learning new languages or those with better baseline cognitive functions are more likely to become bilingual? That's the question Dr. Thomas Bak from the Centre for Cognitive Aging and Cognitive Epidemiology at the University of Edinburgh and his colleagues set out to investigate in the new research.
Their findings revealed that those who spoke two or more languages had significantly better cognitive abilities compared to what would be expected from their baseline. The strongest effects were seen in general intelligence and reading, irrespective of whether the second language was learnt early or late.
'These findings are of considerable practical relevance. Millions of people around the world acquire their second language later in life. Our study shows that bilingualism, even when acquired in adulthood, may benefit the aging brain,' says Dr. Bak.
'The epidemiological study by Dr. Bak and colleagues provides an important first step in understanding the impact of learning a second language and the aging brain. This research paves the way for future causal studies of bilingualism and cognitive decline prevention,' commented Dr. Alvaro Pascual-Leone, an Associate Editor for Annals of Neurology and Professor of Medicine at Harvard Medical School in Boston, Massachusetts, who reviewed the study.
In the Indian context, Suvaran Alladi, from the Department of Neurology, Nizam's Institutes of Medical Sciences, Hyderabad, and her colleagues (including Dr. Bak), reviewed case records of 648 patients with dementia (391 of them bilingual) in Hyderabad and found that bilingual patients developed dementia 4.5 years later than their monolingual counterparts. The study published in the journal Neurology, also found that there were no additional benefits in people speaking more than 2 languages and that the delay in cognitive decline was independent of factors such as education, gender, occupation, and urban vs rural dwelling.
So, thanks to amazing linguistic diversity of India, people in India could be at an advantage as far as delayed cognitive decline is concerned.