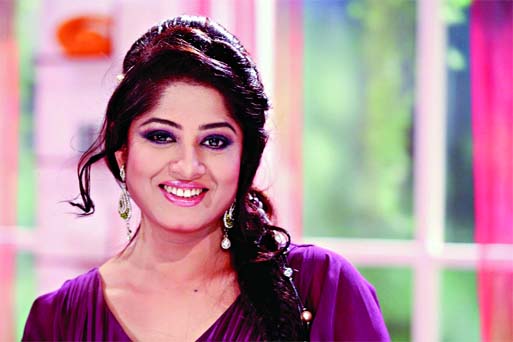 Popular private satellite channel, Channel i is making an interview based TV show on the occasion of the celebration of 50 years of acting career of the countryâs legendary film actress Kobori.
This programme is being hosted by popular film actress and model Moushumi.
While talking about the programme Moushumi told this correspondent, âIn fact, I do not have interest to host any TV show. It is not my work. But after hearing the concept of making this programme on Kobori apa I couldnât refuse the Channel i authority to host the show.â
âIn Bangladesh, Kobori apa has her own identity. There is nobody to compare with her. She is not only successful in the filed of acting but also in the political arena of the country. I am really feeling good to host the show which is making on the occasion of her (Kobori) colourful 50 years of acting career in the countryâs film industry,â Moushumi said.
Now Moushumi is passing busy time with acting in Impress Telefilm Ltd produced a movie titled Mon Janena Moner Thikana. She is acting in role of a lawyer in the movie. Mushfiqur Rahman Gulzar is giving direction of the movie. Popular hero Ferdous is acting against Moushumi.
Therefore, Razzak, Afzal Sharif, Shahidul Alam Sachchu, Shams Sumon, Shirin Shila, Porimoni, among others, are also acting in different roles in the movie.
However, Moushumi has a schedule to take part in shooting of a television commercial of Fu-Wang Noodles on June 7 and 8, Moushumi said.
On the other hand, Moushumi has also started to make a movie titled Shunnyo Hridoy. Besides giving direction, she is also acting in the movie.
She will be also seen in several telefilms in ensuing Eid-ul-Fitr.
Basically Moushumi is passing busy time with acting in her two decades career in the countryâs film industry.
âActing is in my blood. I want to continue acting till my death,â Moushumi said while talking about her acting career.