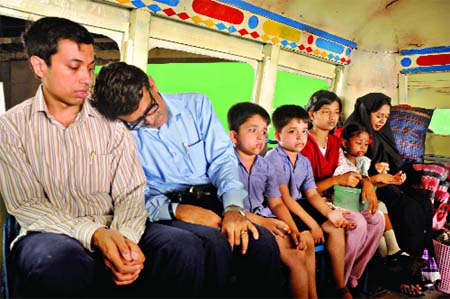 A scene from movie Anil Bagchir Ekdin from the shooting spot

Noted filmmaker Morshedul Islam is making a movie titled Anil Bagchir Ekdin. Story of the movie is based on a novel of noted litterateur, playwright and filmmaker late Humayun Ahmed. Producing under the banner of Bengal Creation Ltd the movie depicts the chain of events of the Liberation War of the country adopting the novel of the same title.
Talented actor Aref Syed is acting in role of Anil in the movie. He has received a long time academic training from Neighbourhood Play House and Marlene Brando of Stella Adler Studio Acting of New York. After returning Bangladesh he engaged himself with theatre troupe, Bottola.
Only having curiosity and interest of exceptional message and making Aref acted in Aniket Alam directed a short film titled The Professionals.
Already this movie has already received many awards and was screened in 20 countries across the world.
On the other hand, in London, Aref received huge appreciation acting in British-Bangladeshi director Jamir Aliâs a short film titled The Guest. This movie was also screened in the Cannes Festival.
Aref has also acted in a guest role in Samia Zaman directed a movie titled Akash Koto Durey recently.
After acting in several television commercials and TV plays Aref is acting in a lead role in Anil Bagchir Ekdin. While talking in this regard he said, âTo establish myself as an actor, I am continuously practicing acting everyday with hard labour. This film is very significant for me for several reasons like its context is based on our Liberation War. Therefore, its story was written by late Humayun Ahmed and the film is being made by noted director like Morshedul Islam. I am trying my level best to express my role in the movie.â
It may be mentioned that the shooting of Anil Bagchir Ekdin has already taken place in the cityâs Agargaon and BFDC areas. Within very short time its shooting will take place in Narayanganj, Manikganj and Dinajpur. Besides Aref Syed, Gazi Rakayet, Farhana Mithu, Misha Soudagar, among others, are also acting in different roles in the movie.