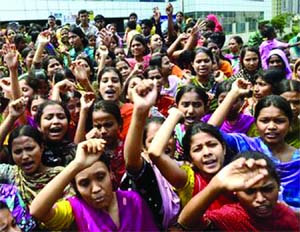 The government has asked Bangladesh's top readymade garment exporters and manufacturers to clear workers' wages before the Eid-ul-Fitr.
State minister for labour and employment Mujibul Haque Chunnu also asked the BGMEA and the BKMEA's 'Crisis Management Core Committee' not to lay off workers before the festival.
At Wednesday's meeting, he directed the committee to take effective steps to avoid unrest in the export-oriented sector.
Bangladesh is the second largest exporter of RMG products and the sector accounts for nearly 80 percent of the nation's export earnings.
It has been plagued by accidents in recent times, prompting buyers and human rights activists to complain about poor working conditions and low wages.
"Unrest in the sector is unacceptable," Chunnu told the meeting.
Bangladesh's RMG sector has been rocked by a series of violent street protests by workers demanding pay rise. Factory owners accepted a Tk 5,300 minimum wage at the government's intervention but several workers' organisations say the amount is insufficient. Workers' representative Sirajul Islam Roni assured of every assistance. Without naming anyone, he alleged several factories were retrenching workers.
The RMG exporters' organisations assured Chunnu of maintaining law and order in their factories and of paying the workers in time. Chunnu said a list of the factories outside the BGMEA and the BKMEA had to be prepared.
"We have to persuade them not to axe workers and clear their dues before the Eid," he said. State Minister Chunnu said stability in the RMG sector was a must in view of the international market.
"Maintaining law and order [in the RMG sector] is the government's top priority," he added.