They are together in daily soap 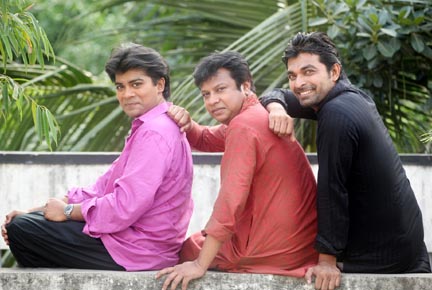 Director Rulin Rahman has
started to make a new daily soap titled Mayar Khela under his own direction and script. For the first time, Zitu Ahsan, Intekhab Dinar and Sayeed Babu are acting together in the daily soap.
Though Zitu and Dinar worked together in two or three serials, for the first time they are working in a daily soap. In Mayar Khela, Zitu and Dinar are acting in role of two friends, while Sayeed Babu is acting in role of Zituâs younger brother.
While talking about the daily soap Zitu told this correspondent, âRulin bhai is a talented director who knows what he wants really. For this reason, he never takes any shot two times if it is satisfactory in one time. I like this thing. Therefore, Babu or Dinar both is well performers. Everybody is trying to work better.â
Dinar shared his feelings by this way, âAs a human being, Zitu is an outstanding person. I want to say this. Therefore, I am fan of his acting. We are acting together in the daily soap. We are really enjoying a lot.â
âIt is really a matter that I am working with these two talented actors in Mayar Khela,â Sayeed Babu said while talking about the daily soap.
This daily soap will go on air on RTV after Eid-ul-Fitr, said its director Rulin Rahman.
On the other hand, Zitu has started working in Aronno Anwar directed a drama serial titled Dohon. Zitu acted a drama serial titled Elebele is being aired on Banglavision now.
Though he was engaged with acting from his childhood, Zitu came into limelight acting in Late Abdullah Al Mamun directed once popular mega serial Jowar Bhata. In fact, by this serial Zitu officially started his acting career as heir of his father late actor Syed Ahsan Ali Sydney. However, Intekhab Dinar acted and Afsana Mimi directed a drama serial titled 'Shatti Tarar Timir' will go on air soon. Therefore, Dinar acted two drama serials titled 'Dhonni Meye,' directed by Matia Banu Shuku and 'Chorkata,' directed by Amlan Biswas are being aired on Channel 9 and RTV respectively now.