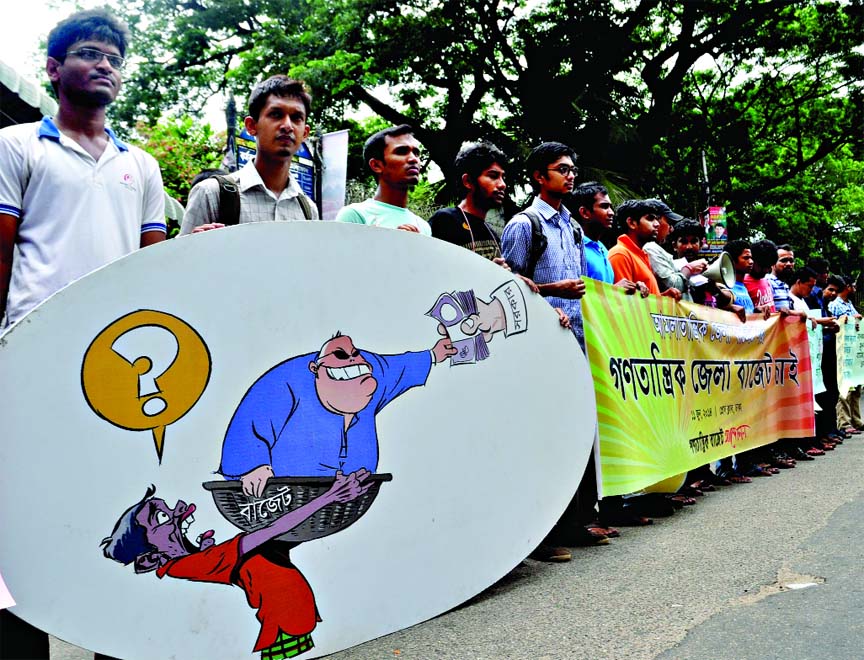 Agriculture activists have demanded allocation of 20 per cent of the total budget's for the agriculture sector. They also demanded formation of an independent price commission to ensure fair price of the agro-products. Â
At a rally held in front of the National Press Cub in the city on Wednesday, Equity-BD, a right-based NGO, and some other farmers' organisations expressed their concern over the lower allocation in the proposed national budget for fiscal 2014-15.
Mostafa Kamal Akanda, Assistant Director of the Equity-BD, moderated the programme while Monir Ahmed, President of Central Krishok Moitree Federation, Mainuddin Hawladar of Bangladesh Krishok Federation, Golam Sarwar of Krishi Farm Sramik Federation, Syed Aminul Hoque of Equity-BD addressed it, among others.
The speakers said, Tk. 12,390 crore for the agriculture sector is inadequate considering needs. They alleged that the government was decreasing the budgetary allocation for agriculture every year as per the advice of the World Bank and the IMF. For this reason, the government could not attain self-sufficient in food. Â
If such situation continues, it will be more difficult to feed the increased population. Finally, the number of the poor people will be increased in the country, they observed.
Monir Ahmed said that the allocation in the agriculture sector is 4.95 percent of the total budget and less than that of last year. "When India has increased their agricultural allocation by 20 percent, it is 7 percent of their total budget, our government has decreased instead of following them." Â
Mainuddin Hawladar said, the government by decreasing agriculture subsidy is pushing the farmers into the dependency on the profit hungry multinational companies and the money lenders.
Syed Aminul Hoque said, the adverse situation has to overcome.Â  He demanded formation of an 'Independent Agriculture Price Commission' to ensure fair price of agro-products.
Mostafa Kamal Akanda emphasised on agricultural research, saying that it is very important for the development of agriculture and increase of the food production. He urged to allocate sufficient amount in the budget for local research.