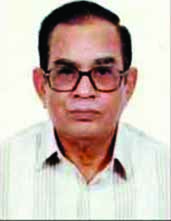 Justice B K Das, former Chairman of Bangladesh Press Council and formerÂ  advisor to the first caretaker government, died at city's Apollo Hospitals on Thursday morning. He was 71.
He left behind a son, a daughter and a host of relatives and well-wishers to mourn his death.
Justice BK Das was born in a respected Hindu family of Sylhet in 1943. He joined the legal profession after completing his graduation degree on law from the Dhaka University.
He joined Bangladesh Press Council as the Chairman in November 10, 2010.
He had been appointed as the Chairman of Bangladesh Press Council for a three years term.
BK Das served as Justice of the High Court division from 1999.
He also served as Justice at the Appellate division of the Supreme Court since 2009.