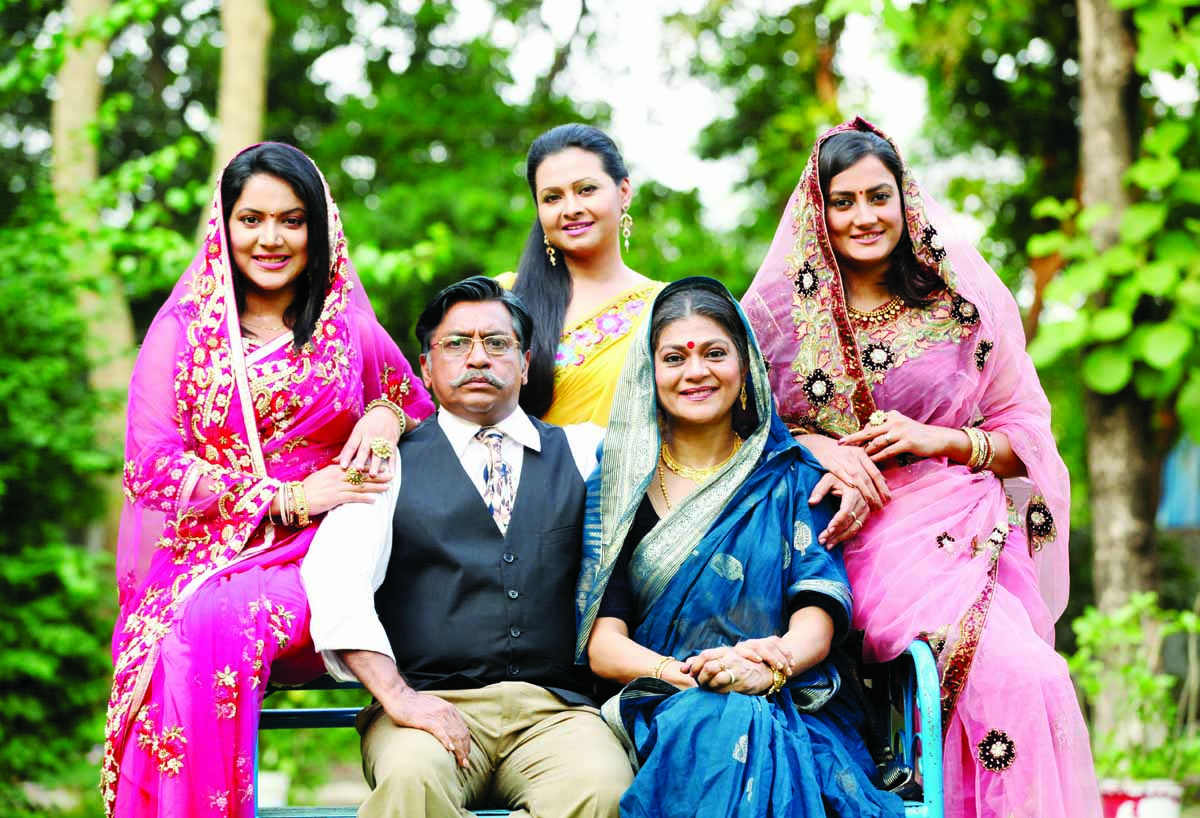 National Film Winner actor Shahiduzzaman Selim has four wives. He tied the knot for four times. But it didnât happened in reality. He tied the knot in the story of a play.
On the occasion of ensuing Eid-ul-Fitr Aniruddho Russell has made a six-episode serial titled Niamat O Taar Bibigon under the script written by Moin Ahmed.
Shahiduzzaman Selim acted in the title role in the Eid serial, while Shampa Reza, Bijori Barkatullah, Aparna and Urmila Srabonti Kar have also acted in four wives of Selim in Niamat O Taar Bibigon.
While talking about the Eid serial, Selim told this correspondent, âIn fact, there is lack of good story to make TV play now-a-days. Story of Niamat O Taar Bibigon is really nice. Viewers are habituated to enjoy contemporary story while watching the plays. For this reason, I am confident that viewers will enjoy this serial during Eid festival.â
Shampa Reza shared her feelings by this way, âBy this time I have been acting in TV plays in few number of plays. I have liked the story of Moin. As a result, I have worked very attentively in the Eid serial.â
âWe have suffered a lot facing scorching heat while taking part in shooting of Eid serial. But we have tried our level best to make a successful serial for the viewers on the occasion of ensuing Eid-ul-Fitr,â said Bijori Barkatullah while sharing her feelings about Niamat O Taar Bibigon.
Aparna and Urmila are also delighted to act in this special Eid serial because they received something new about acting while taking part in shooting, they said.
Intekhab Dinar, Maznun Mizan and Moin Ahmed also acted in other roles in the serial.
Jointly produced by Syed Irfan Ullah and Fahmida Irfan the Eid serial has been made under the banner of Drik. It will be aired in any satellite channel during Eid festival. Shooting of the serial was taken place at Mamatapolli in Zirabo in Savar.
However, Shampa Reza has already started to take part in shooting in Rulin Rahman directed a drama serial titled Mayar Khela.
Meanwhile, Shahiduzzaman Selim has already finished shooting of Mizanur Rahman Labu directed a play titled Moho Maya Aar Bhalobasha. Kushum Shikdar acted against him in the play.
Therefore, on the occasion of Fatherâs Day Selim acted a play titled Aloy Bhubon Bhora was aired on NTV yesterday.Â Â Â