How brain responses to shape and colour 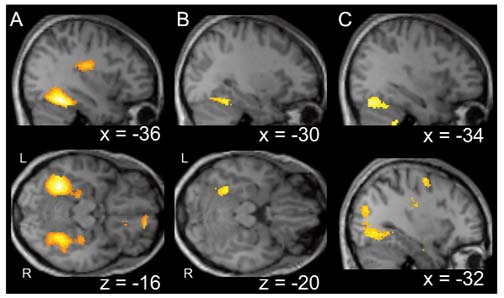 Life Desk :
Researchers have found an insight into how brain responses to faces and objects with responses to colours.
The study, by Bevil Conway, Wellesley Associate Professor of Neuroscience, and Rosa Lafer-Sousa, a 2009 Wellesley graduate currently studying in the Brain and Cognitive Sciences program at MIT, reveals new information about how the brain's inferior temporal cortex processes information.
Located at the base of the brain, the inferior temporal cortex (IT) is a large expanse of tissue that has been shown to be critical for object perception.
An existing, popular theory is that the parts represent a hierarchical organization of information processing, a notion that has previously been supported by functional magnetic resonance imaging (fMRI) in monkeys.
For their study, Conway and Lafer-Sousa used non-invasive fMRI to measure responses across the brains of rhesus monkeys to a range of different stimuli and obtained responses to images of objects, faces, places and colored stripes. "The technique enabled us to determine the spatial distribution of responses across the brain, and has been useful in figuring out how the visual brain is organized," Conway said.
Conway examined the way the nervous system processes colour using physiological, behavioural, and modelling techniques.
Conway and Lafer-Sousa assert that colour provides a useful tool for tackling questions about processing in the IT region, as it has little "low-level" feature similarity with shapes (psychological work shows that colour can be perceived independent of shape)-therefore any relationship between colour-responsive and shape-responsive regions should reflect fundamental organizational principles.
"Our work showed that, to a large extent, colour and faces are handled by separate, parallel streams, and that these pieces of information are processed by connected, serial stages," Conway said.
"One can imagine the processing as an assembly line, where some aspect of faces- and some aspect of colour- is computed first. The output is then sent to another region downstream that makes a subsequent computation."
Conway said the most striking aspect of the study is what it reveals about the precision of the organization of the brain. We often think that because the brain consists of billions of neurons, that at some level it must be quite variable how the neurons are organized.
The study shows that there is a remarkable precision in organization of the neural circuits for high-level vision, which will make tractable many questions bridging cognitive science and systems neuroscience.
The study is published in journal Nature Neuroscience.