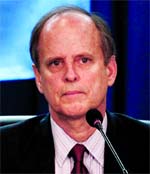 The outgoing UN Resident Coordinator in Dhaka has said it is "very clear" to them that Bangladesh's has a "very strong interest" in finding solutions to the Rohingya problems.
"I think everyone knows Bangladesh more than any other country wants to see a solution to this problem because you are suffering the consequences of the problem and you are paying the heavy toll by your generosity in welcoming so many refugees into your country," Robert Watkins said, replying to a question.
The question came as Myanmar has blamed Bangladesh for delaying the start of a repatriation process for hundreds of thousands of Rohingya Muslim refugees, saying it feared Dhaka could be stalling until it receives multi-million dollars of international aid.
More than 600,000 Rohingya have fled predominantly Buddhist Myanmar to neighbouring Bangladesh since late August to escape ethnic violence that accompanied a brutal military counter-insurgency operation after Rohingya militant attacks on security posts in Myanmar's Rakhine State.
Watkins, who will leave Dhaka soon, was meeting the diplomatic correspondents under the Diplomatic Correspondents Association, Bangladesh's flagship 'DCABtalk' on Thursday in Dhaka.
He said it is "very clear that Bangladesh has the clear interest in rapid and durable solution to the problem".
"I know that Bangladesh will do everything to negotiate for that," he said, adding that the difference between the two governments is that who will quality for the return.
"And I think Bangladesh rightly said all Rohingyas should be returned."
Watkins discussed almost all issues related to UN mandates in Bangladesh, but the refugee crisis dominated the talk.
"We all know where the problem is originated. Problem is not to be solved in Bangladesh. Keeping people alive can be solved in Bangladesh. But it's across the border where we have to find solutions."
According to him, "changing mindset" of the people in Rakhine and in the entire Myanmar is the key to a durable solution.
"The solution is not easy. It's not the question of the government and the military changing its policy, that is important of course, we have mechanism for that. Myanmar said they will adopt the Rakhine Commission recommendations, but it is more than the implementation, which is having the change of the mentality of the people of the entire country," he said.
"There is very deep rooted antagonism between the population of the Rakhine state against the Rohingyas and that is unfortunately going to take a long time to address," he said, adding that "even if the two governments find solutions to repatriate, we have to consider their safety and security".
"This crisis is actually the latest episode in a long story that started 30 years ago," he said adding that solutions have been found before, people returned only to see them come back again as the clamp down and communal problem persists in Rakhine State.
Replying to a query, he said, the UN has been trying to do some "peace building" activities, but that has been halted after the UN system was blocked in the Rakhine State.
"The biggest problem for the UN now is that we have been blocked in the last six months."
He said granting the Rohingyas refugee status or not, is the choice of the Bangladesh government since the country is not the signatory of the UN convention.
Replying to a query on the upcoming general elections, he stressed on the free, fair and participatory elections in Bangladesh.
"It is up to the political parties whether they participate or not. But we want to see them participate in the elections," he said, adding that the UN is working to strengthen the capacity of the Election Commission.
"People have to be reassured that all of the institutions of the country are neutral and not working under pressure coming from any other sources and they are independent," he said.