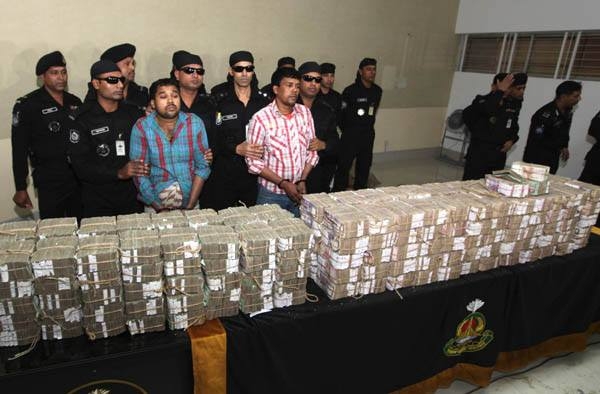 Two men suspected for their involvement in the Kishorganj Sonali bank heist have been arrested in Dhaka with five sacks of currency notes.RAB nabbed the two from a house at Shyampur Balur Math area in the capital with the sacks on Tuesday afternoon. The elite forceâs spokesperson ATM Habibur Rahman told bdnews24.com that the two arrested were identified as 'Motahar' and Sohel alias Habib, but details of their background was not immediately available. RAB Additional Director General Ziaul Ahsan told bdnews24.com: âSeveral sacks full of currency notes have been seized from the two men. We will count it after taking the sacks to the RAB headquarters.â Habibur Rahman confirmed they found five sacks full of currency notes. Ziaul Ahsan also said that they will later brief the media about the arrests and the seizures. The RAB official said they followed 'definite leads' to track down the two men and the currency sacks seized from them were 'quite surely' loaded with the cash taken out of the Sonali Bank branch at Kishoreganj. Officials at the bank, situated in Kishoreganjâs Rathkhola, on Sunday noticed a 15-foot long tunnel, dug up during the weekend, that led to the vault from an abandoned room of a house next to the bank. Later they found out that the robbers had made off with more than Tk 164 million in the daring heist. A woman, along with two of her daughters, stays in the other room of that house. Her husband lives in Saudi Arabia. During police interrogation, she said she was not aware of the heist or someone tunnelling through their premises. However, eight policemen who were on duty at the Sonali Bank were temporarily suspended for dereliction of duty. Deputy General Manager of the Sonali Bankâs branch, Sheikh Amanullah also filed a case at Kishoreganj Model Police Station on Sunday night accusing unnamed persons for the heist.â