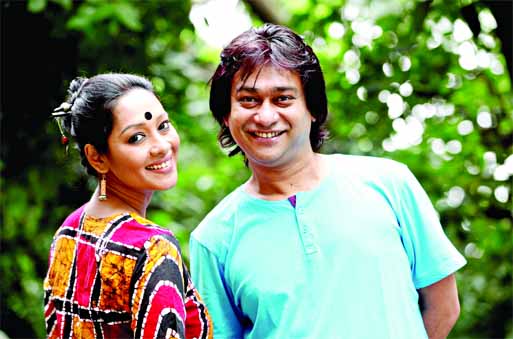 Popular singer cum TV actor Partho Barua acted against popular TV actress Moutushi Biswas for the first time as a pair in a TV play titled Ayna Mohol-e Ayna last month. It was directed by Redoan Roni.
After that they again performed together in a faction play titled Ghumtattwo under the direction of Shetu Arif. Shetu Arif has also written script of the play.
Due to necessity of life related activities every human being loses his/her times day by day. At one stage, when he/she can realise the matter wants to get back those times. Main theme of the play Ghumtattwo is based on this message.
Partho Barua and Moutushi Biswas acted in role of husband-wife in the play. Partho acted in role of Mehrab, while Moutushi played in role of Joyeeta.
Shooting of the play, produced under the banner of Versatile Media, was wrapped up at a shooting house in the cityâs Uttara area last week. Â
While talking about Moutushiâs acting Partho Barua told this correspondent, âActing capability of Moutushi is much better rather than other contemporary actresses. She is very serious actress. We have tried our level best while taking part in shooting of the play.â
Moutushi shared her feelings by this way, âIt is no doubt that as a singer, Parthoda is outstanding. Besides rendering songs, he can act very naturally. It is his quality. In fact, I am really impressed working with him. He has already received acceptance from not only the directors but also from the viewers. He has achieved it only for his acting quality.â
Therefore, Partho has acted against popular actress Tarin in Sakhawat Hossain Manik directed a play titled Aporahno.