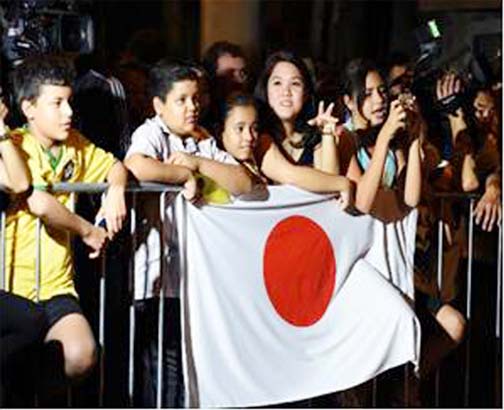 Life Desk :
Brazil's sizeable Japanese population is torn between supporting the nation of their birth or their adopted country though for some, such as Daniel Hirata, there is no question of not supporting the host country.
Hirata, the 35-year-old son of Japanese migrants, said he was born in Brazil and would root for his beloved Selecao if they face off with the Blue Samurai in the tournament.
"But if Japan beat Brazil, I wouldn't be sad," said the kung fu academy manager.
Hirata and other Japanese-Brazilians do not have to worry about such a matchup for now as the two teams are not in the same group and do not risk crossing paths until at least the quarter-finals.
So on Saturday night, they can put on their blue jerseys and cheer Japan on as they play their first game of the World Cup against Ivory Coast in the northeastern city of Recife. Brazil is home to the world's largest Japanese community outside Japan, with some 1.8 million people of Japanese descent. About 60 percent live in Sao Paulo state.
The first wave of Japanese migrants came to Brazil to flee poverty in their country and work in the South American country's coffee plantations under an agreement between the two governments. Sao Paulo's Japanese neighborhood is in a district called Liberdade, a neighborhood lined with red Japanese-style street lights, restaurants serving tempura and shops selling anime videos.
The stores, however, are decorated with Brazilian flags for the World Cup and one of the hottest-selling items is the jersey of Brazil star forward Neymar.
But when it comes to football, it remains difficult for some to choose between Brazil and the country of their elders who arrived in the first wave of Japanese migration in 1908.
Emilia Kiyohara, a medical office worker in her 50s, found three Japanese team jerseys buried under piles of clothes in a shop where only Brazil's yellow shirt was on display.
"If Brazil and Japan play each other, I will root for Japan in the first half and Brazil in the second half," she said.
Japan's turn to win -
At a Japanese-Brazilian cultural center, workers installed a large projector screen, hung paper lanterns in the colors of both countries and brought out the two national flags to set up for a viewing of the Saturday night game.
Claudio Kurita, director of the Brazilian Society of Japanese Culture and Social Welfare, said having Japan play in Brazil was a chance for migrants to feel closer to their ancient land.
Some 3,000 Japanese-Brazilians went to watch the Blue Samurai practice outside Sao Paulo last weekend, he said.
"Anything that brings the pioneers closer to Japan makes them happy," said Kurita, who wore the number 17 jersey of Japan player Makoto Hasebe. "Even the elders who know nothing about football were very excited."
But even among the younger generation, some feel deep links to their ancestors' homeland and make their feelings known through football.
Fabiana Noda, 29, a third-generation Japanese who wore a Blue Samurai shirt, said she will be backing the Asian team.
"Brazil already won the World Cup five times," she said. "They should let Japan win it once."