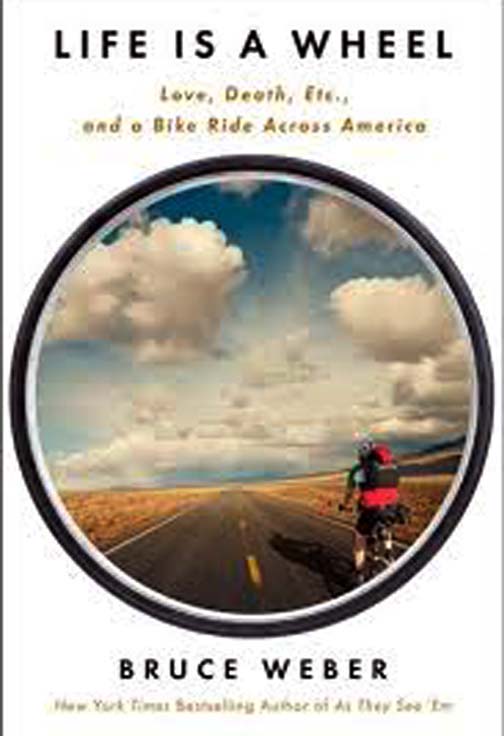 Life Desk :
"Life Is a Wheel: Love, Death, Etc., and a Bike Ride Across America" (Scribner), by Bruce Weber
A cross-country bicycle trip, like an end to end hike of the Appalachian Trail, is usually a one-and-done experience, a once-in-a-lifetime adventure that doesn't bear repeating.
Not so for Bruce Weber, a longtime reporter for The New York Times who at age 57 decided to reprise the coast-to-coast ride he took 18 years earlier, post a blog at stops along the route and then make the journey the focus of his latest book, "Life Is a Wheel."
Â After flying to Portland, Ore., to pick up the $8,000 bike he shipped from New York, Weber set out from coastal Astoria on what would be a 4,122-mile ride that took him to 15 states over a 101-day stretch that included a few days off the bike to fly to a funeral in Los Angeles and a wedding in New Orleans.
Â For readers who haven't pedaled the roads for some time, the author lays out the familiar agonies and dangers of long-distance cycling: steep, muscle-straining hills, fierce head winds, speeding truckers, roads with narrow or nonexistent shoulders and choppy, debris-strewn pavement.Â  But magnificent vistas that elevate Weber's spirits help compensate for the pain. Even after he bonks for the first time in 90-degree heat in the scrublands of eastern Washington, he abides by his mantra that "moving forward is the cure for all ills. Keep pedaling."
Â Weber's trip is a solitary exercise, but the advent of the cellphone and the Internet make it far less lonely than the 1993 ride when pay phones offered his only link to the outside world. "One day you're a Flintstone, the next a Jetson" is his take on the technology leap that enables him to dispense texts, emails and phone calls at will.
Â The long hours in the saddle gave him ample opportunity for reflection, enabling Weber to share thoughts on life and death, of which he is intimately acquainted through his most recent work as an obituary writer.
Â His book is more than a chronicle of his two-wheel journey across endless prairie and farm fields and through countless small towns and suburbs. One of the most fascinating sections recalls the author's 1995 bike trip in Vietnam, a more gripping adventure than anything he encounters on his latest ride. He is arrested while riding alone in the jungle, then stranded without food or water, an episode he can now fondly look back on as "one of the great moments of my life."
Â He writes about his sometimes-tumultuous relationships with family members, the changing cast of women in his life and how a wife and children never came to pass. But at a stage of life when thoughts of advancing mortality gain traction, Weber finally finds that special woman, a former co-worker named Jan, with whom he wants to share his life. The romance took root during a bike trip - how else? - in the south of France. And if Weber ever decides on a third cross-country bike ride, Jan intends to go with him.
This delightful book is sure to appeal to cyclists who may harbor dreams of pedaling from coast to coast. But any reader simply looking for a well-written and entertaining travel story filled with insightful thoughts about life, family and aging will not be disappointed.
Courtesy -UNB.