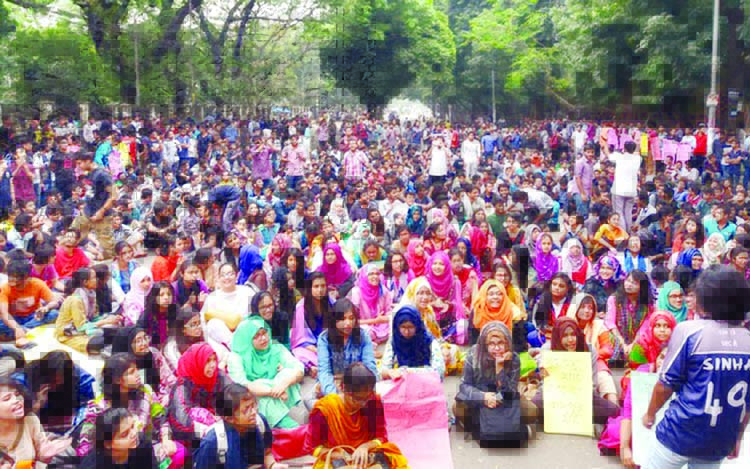 The students of BUET staged a protest rally and delivered a memorandum to the administration on Sunday. This photo was taken from near BUET campus.

Students at the Bangladesh University for Engineering and Technology, BUET, have now boycotted class for 21 days over a list of demands, including punishment to the students tied to an attack by 'outsiders' on their peers.
The students at the country's leading engineering institution had clashed with students tied to Dhaka University's Shaheed Sergeant Zahurul Haque Hall over a 'drive to remove outsiders' on Oct 26-27. Five BUET students were injured in the incident. BUET students have boycotted classes and labs since Oct 29, demanding those involved in the violence be brought to justice and a list of seven other demands. On Oct 30 they held a protest rally and delivered a memorandum to the BUET administration. The administration has repeatedly made promises and ordered students to return to class, but have not met all of the demands, protest convener and mechanical engineering department student Partha Pritom Das told this news agency.
"We have only received promises. We will continue our peaceful protests until the demands are met."
The four thousand students at BUET support the protests, he said. "We are not going to class. We hope the vice chancellor will take swift action on this matter."
BUET Directorate Student Welfare Director Prof Satya Prasad Majumder had filed a case over the incident at Chowkbazar Police Station against the son of an employee, Raju, and several others. Police detained Raju, but students claim he was released on bail soon afterwards. Dhaka University and BUET have each formed a committee to investigate the incident. But neither has submitted a report, even after three weeks have passed.
The probe led by Zahurul Haque Hall Residential Teacher Abdur Rahim was supposed to turn in its report a week after the incident. The committee interviewed eyewitnesses, hall staff and students on Oct 28, 29 and 31 and Nov 6 and Nov 7. "We need more time," Abdur Rahim told bdnews24.com when asked about the delay.
"The matter is complicated. It has become even more complicated since CCTV footage of the BUET students' violence was leaked on the internet." The BUET administration has yet to give them the entirety of the CCTV footage, he said. "As the incident occurred on the BUET campus it is mainly their responsibility. They will be able to give a clear idea of how it started. We are investigating if any of our students are involved."
The Dhaka University teacher said he favoured 'remedial' measures instead of punishment for those responsible in an effort to avoid such 'misunderstandings' in the future. Despite repeated notices from the BUET administration urging students to return to class, no one is willing to speak about the probe report.
"I don't know," said Student Welfare Director Prof Satya Prasad Majumder when asked about the issue. "This is under the registrar's jurisdiction. Contact them." "I cannot say anything about the probe," said Registrar Prof Md Saidur Rahman. "We have a Student Welfare director who handles such things."
"I do not have the jurisdiction to discuss this matter," he said after he was told that Prof Majumder referred journalists to him. None of the officials and staff at the Registrar's Office and the Directorate of Student Welfare were willing to speak to journalists. The office of Vice Chancellor Prof Saiful Islam was contacted for comment, but it said he was 'busy'.