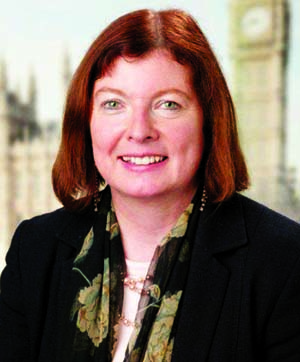 The UK parliament has had a lengthy discussion on the Rohingya crisis which Minister for Asia and the Pacific Mark Field calls a 'global humanitarian catastrophe' and not just a Muslim issue.
British shadow Minister for International Development Roberta Blackman-Woods, who recently visited Bangladesh and Rohingya camps, moved the motion with Ian Paisley in the chair.
Over 20 MPs took part in the discussion at the House of Commons on Tuesday, according to Hansard Online, which says it puts in a substantially verbatim report of what is said in parliament.
Roberta attended the Commonwealth Parliamentary Association conference in Dhaka as a member of the British delegation. In her opening remarks, Roberta said, "Although stories about the crisis are similar, my visit brought home the vastness of the camps."
"The UNHCR's head of emergency planning told our group of parliamentarians that the camps needed to house the new refugees are the equivalent of a city larger than Manchester and these are being established almost overnight," she told the MPs.
"And it was built with no infrastructure, housing, water, sanitation or any of the tools needed for self-subsistence," she quoted the UNHCR emergency chief.
The International Rescue Committee estimates that nearly 300,000 people need food security assistance and more than 400,000 people need healthcare, Roberta said.
Only a fraction of the 453,000 Rohingya children at camps receives education. The young people they met were desperate for education-particularly higher education, the shadow minister continued.
Another MP, Philip Hollobone, said, "It is ethnic cleansing, pure and simple, and must be 100% condemned through all diplomatic channels available to us."
"I appreciate the sensitivities of the nascent democracy in Burma, but we must make it clear that the generals are responsible for this ethnic cleansing and that the international community will not put up with it."
"When it comes to the potential return of Rohingya refugees, returning stateless people to remain stateless in their country of origin is not good enough. These people require their nationhood to be given to them."
He also said Britain must stimulate further contributions from other countries, particularly Muslim countries, because 'we are dealing with a Muslim population', and "there are lots of rich Muslim countries in the world that, frankly, should be stepping up to the plate rather more".
A family of Rohingya refugees at the makeshift camp on Balukhali Hill in Cox's Bazar's Ukhia. Photo: mostafigur rahman
Taking the floor, Mark Field said, "It would be very dangerous for this to be seen as only a Muslim issue.
"It is a global humanitarian catastrophe, and while I accept what he says - that we want to see all nations contributing - to try to frame it in an ethnic way would be the wrong way forward."
Rushanara Ali, a Bangladesh-origin Labour MP, asked the minister whether they will be pursuing an independent security presence to protect the Rohingyas.
"Because otherwise, we are expecting the perpetrators of ethnic cleansing to be the ones managing this process?"
"Absolutely," Mark Field said in reply. "We will. I am also wary of the idea of having a long-term presence there, rather like what has happened in the Middle East where one has an unsustainable position for the longer term."
"But in the short term, we need to have an independent international presence to police this matter."
He also said the UK government concluded that the inexcusable violence perpetrated on the Rohingya by the Burmese military and ethnic Rakhine militia appears to be ethnic cleansing - or is ethnic cleansing.
The UK has been leading the international response diplomatically, politically and regarding humanitarian support.
Rushanara expressed concern over the supposed agreement between the Bangladeshis and the Burmese as what she terms 'is deeply problematic", given the state of camps in Rakhine and the way the Rohingya are being treated.