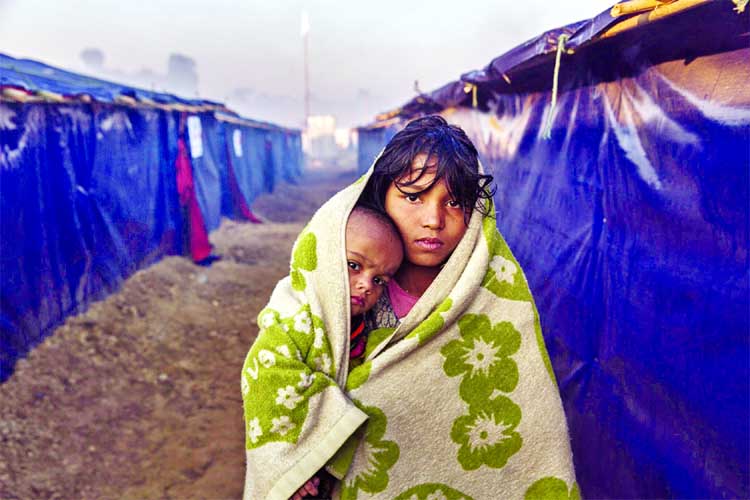 A young Rohingya refugee and her 10-month-old niece for a walk in the early morning at Kutupalong camp in Cox\'s Bazar to warm up from the cold inside their shelter.

Desk Report :
As the Rohingya refugee emergency in Bangladesh enters its fourth month, the United Nations agencies are scaling up their relief work to respond to a range of issues, including outbreak of diphtheria, lack of access to sanitation, and sexual violence.
The World Health Organization (WHO) has released $1.5 million from its contingency fund to deploy additional staff and resources to combat a rapidly spreading outbreak of diphtheria among Rohingya refugees in Cox's Bazar.
The disease has so far killed 21, with more than 1,500 probable cases reported, according to the UN News Center.
Â "The Rohingya refugees are an extremely vulnerable population, with low routine vaccination coverage," said Roderico Ofrin, Regional Emergency Director, WHO
South-East Asia Regional Office. "The funds released will be crucial to sustaining our efforts until we receive more support from donors for this response."
For 2018, the health sector will request additional funding to help 1.2 million people living in refugee camps and temporary settlements.
Meanwhile, according to the Office of the UN High Commissioner for Refugees (UNHCR), people are continuing to arrive in Bangladesh from Myanmar.
However, the agency reports that the pace of the influx has now slowed, with estimated average arrival rates having dropped from 745 per day in November to 100 per day so far this month. In a UNHCR supported quick assessment survey, refugees expressed numerous worries, including feeling unsafe at night given weak shelters and a lack of lighting, and concerns about general safety.
Access to sanitation is still insufficient, leading sometimes to long queues for latrines. Women and girls are anxious about the shortage of private bathing spaces, forcing some to wash outside their shelters in the early morning hours.
The survey also found that some children have to walk longer distances to fetch water and bring firewood. Parents and children want access to education and more safe places for children to play.
Health services are also a wide concern. Increased mental health support for those who have witnessed the killings or suffered torture or rape remains crucially needed.
Refugees cite continued feelings of depression and rejection, especially among the elderly and disabled. Many young people are worried about their uncertain future.
Some refugees said that irregular food distributions and long queues had meant going hungry for days.
Drawing upon the findings of this latest assessment, UNHCR will further refine and reinforce its protection and assistance.