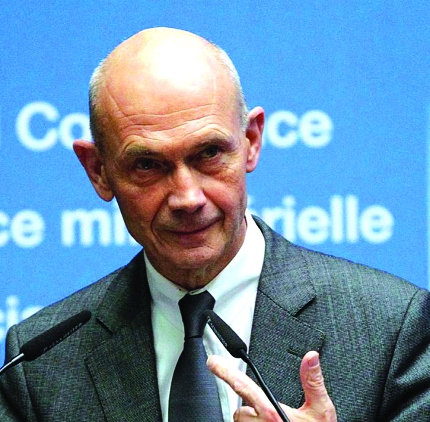 UNB, Dhaka :
Former World Trade Organization (WTO) director general Pascal Lamy arrives here on Saturday on a two-day visit representing France to seek Bangladesh's support to host World Expo 2025.
Four countries are candidates to host the World Expo 2025 - France (in Greater Paris), Japan (in Osaka), the Russian Federation (in Ekaterinburg),
and Azerbaijan (in Baku). The bid was submitted on September 28 to the Bureau International des Expositions (BIE), the intergovernmental organization in charge of overseeing and regulating World Expos. The 170 member states of BIE will elect the host country at the 164th General Assembly in November 2018. Lamy will meet Prime Minister Sheikh Hasina, Foreign Minister AH Mahmood Ali, Commerce Minister Tofail Ahmed and Civil Aviation and Tourism Minister AKM Shajahan Kamal during his visit, a senior foreign ministry official told UNB. Meanwhile, Centre for Policy Dialogue (CPD) will host a public lecture on Saturday afternoon where Lamy, the two times former WTO DG and special envoy of the French government, will deliver speech on the theme "Knowledge to Share, Planet to Care."
The theme chosen for this expo is "Knowledge sharing and protection of the planet," which reflects the priorities of the international action to protect the planet, while 2025 will coincide with the 10th anniversary of the Paris Climate Agreement. France had hosted five major world exhibitions in the 19th century, and hosted an international exhibition on modern art and technology in 1937.
France thinks the World Expo is also an opportunity for French citizens and the country to redesign their openness to the world and French adherence to the universal values. "We have strong arguments and undeniable strengths to support our bid to host this major event, which will further enhance our country's appeal one year after hosting the Olympic Games in 2024. The goal is to attract 40 million tourists to visit this expo," said Minister of Europe and Foreign Affairs Jean-Yves Le Drian recently.