Marsh brothers plunder centuries as England wilt in the heat 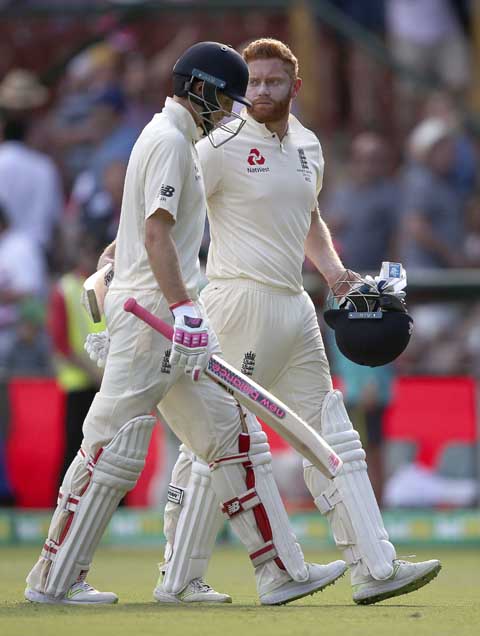 Shaun and Mitchell Marsh became the third set of brothers to score centuries in the same innings for Australia as the purgatory continued for England in the final Sydney Ashes Test on Sunday.
Shaun raised his second century of the series in the fourth day's opening over and an hour later younger brother Mitchell repeated the dose with his second hundred of the series.
The Marsh boys joined Greg and Ian Chappell and Steve and Mark Waugh to score brotherly centuries for Australia, while it is the eighth time overall it has happened in Test cricket.
But Mitchell Marsh almost threw away his century in all the excitement as he embraced his brother mid-pitch before he had completed the second run and needed to scramble back to his crease to avoid being run out.
Mitchell Marsh was bowled next ball by Tom Curran for 101 off 141 balls with 15 fours and two sixes. The century came after his 181 in the third Test in Perth.
He was the third centurion of the massive Australian first innings total, following Usman Khawaja's 171 on Saturday.
At lunch on a scorching day, Australia had extended their lead over England to 232 runs at 578 for five, with Shaun Marsh unbeaten on 145 off 278 balls and Tim Paine not out 14.
Shaun Marsh scored an unbeaten 126 in his man-of-the-match performance in the second Test in Adelaide.
Greg and Ian Chappell were the first Australian brothers to notch centuries in the same innings at The Oval in 1972 with Steve and Mark Waugh the last to do it against England, also at The Oval, in 2001.
England were in a dire position, struggling to contain Australia's mushrooming lead in temperatures hitting 41 Celsius (106 Fahrenheit) after toiling in the field for 183 overs.
James Anderson bowled with great economy in the stifling conditions, with one for 56 off 34 overs, while both spinners Moeen Ali and Mason Crane went for a combined 325 runs and two wickets.